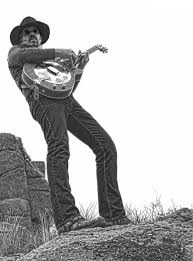 The latest release from singer/songwriter-Americana act Django Mack, 100 Page Tattoo, continues the band’s creative progress while consolidating their past achievements. Few outfits working today in this style can claim the depth and entertainment value of the six songs included with this new EP release. Lead singer and primary songwriter Brandon Butrick has created a memorable persona to help get the band’s material over, but the songwriting is strong enough that it’s really just gravy – these songs would get over with their target audience in any form they took. 100 Page Tattoo succeeds for a lot of reasons, but chief among them is the unquestionable credibility the musicians and singer engender in relatively short order. In other words, Django Mack plays and sings like they mean it.

The force and attentiveness they bring to the title song testifies to that fact. “100 Page Tattoo” is the ideal opener for the EP and throws down a gauntlet of sorts for newcomers to the band. Django Mack pursues the music they hear in their head rather than trying to merely tailor to their output to audience expectations and they manage to bring the listener along with them without ever forcing the issue. The second track on the EP, “Lookout!”, finds them excelling with a simmering slice of mid-tempo blues rock that climaxes nicely with each chorus and features some brief instrumental breaks adding much to the performance. They use horns with this song as they did in the first, but the presence of brass is lesser in favor of giving Rich Flynn’s guitar a wider berth than before. “Knock Me Out” is much more traditionally singer/songwriter in the manner it carries itself and the acoustic sound of the song isn’t so far removed from the EP’s typical approach that it sounds out of place. Instead, this track comes off as a strategically placed track intended to shift things for listeners in an interesting way and Butrick’s phrasing makes the most of this different mood..

The peak of the EP comes with its longest track “Knife Fight”. The slightly threatening mood of the song is never overplayed, thankfully, and sustained throughout the entirety of the song. Butrick does a superb job of tapping into the suggested menace without ever coming off as too forced and the slowly developing nature of the musical arrangement allows the song to breathe. “Roadrunner” is another shift in mood without resorting to acoustic guitars and the upbeat, semi humorous tint of the piece comes at a good place in the EP’s running order. It also pairs quite naturally with the slightly lewd humor of the EP’s final cut “Rooster in the Henhouse” and this rousing rock rave up with blues influences packs quite an aural wallop while still showing much of the customary subtlety separating Django Mack from many of their peers and contemporaries alike. 100 Page Tattoo is a timely, forever timely, reminder of the style’s abiding and time-tested power but it also shows a band continually working on evolving their sound and songwriting acumen with positive results.