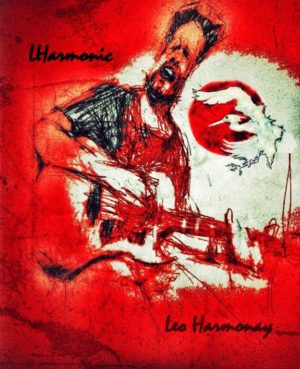 The third release from Hudson Valley based singer/songwriter Leo Harmonay, LHarmonic, is full of the usual signatures elements in both his performances and songwriter that marks him as a different breed of cat from his contemporaries. The unique confluence of a number of musical influences makes this a potent stew from the beginning, but it also possesses a relaxed musical character and confidence in its writing reflecting his steady growth as a recording artist and performer since his first release. There’s an effective blend of less lyrically ambitious numbers alongside poetic inventions that never bite off more than they chew and convey themselves without ever losing the listeners in a morass of obscure imagery. Harmonay’s vocals, likewise, reflect his blues and jazz influences, but there’s plenty in the music as well that show off his roots quite well. This is a great release for anyone already familiar with Harmonay, but it’s likewise well suited for newcomers.

It begins with a good, generous spirit on the song “Shine On You”. There’s a timeless quality to this sort of material and tenor of performance that we don’t hear again on the EP and the restrained build of this song proves quite effective in the end. The harmony vocals and country-tinged guitar licks filling the arrangement are nice additions to the tune. “Deep Ocean Blue” brings out the more poetic qualities in both Harmonay’s music and lyrics while still remaining close to the jazzy influences flavoring many of his compositions. His singing continues in the same relaxed mode we heard in the opener, but the vocal melody is a little more challenging than before. “Heart Alone” has a near shuffle feel and an understated mood that keeps its darker emotions from overcoming the song’s delicacy. Harmonay brings a little understated gravitas to the song as well that matches up neatly with the arrangement. “Glorious Decline” is a much more evocative, artful piece than anything coming before it, but exerts a definite hold on listeners despite the ghostly nature it manifests at key points. The writing on this number is stronger than the excellent songs it keeps company with on LHarmonic and Harmonay’s singing makes the most of the moment.

“Rainbow Sounds” thankfully lightens the mood some and, despite the electronic touches added to the song, comes across as one of Harmonay’s most well-rounded and traditionally minded efforts. It has a slightly psychedelic quality that never sounds obscure or put on. Harmonay ends the EP with a reprise of the first song and the longer running time isn’t wasted as the musical arrangement evolves in a natural, satisfying fashion. His addition of a live bonus track, a performance of “Deep Ocean Blue”, is noticeably different from the studio cut but no less pleasing. LHarmonic is a worthy successor to Harmonay’s previous two studio releases and shows clear development, but there’s likewise clear indications that this talented singer-songwriter is nowhere near his peak yet.