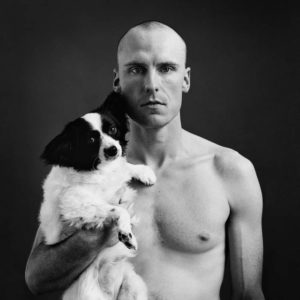 The nine song collection from Noble Son entitled Joy in Violence is an outgrowth of an episode with mental illness that the creative mastermind behind the project, Adam Kirschner, recently experienced. He sat down and composed eight songs in fourteen days and followed that up with likely six intense days recording the album with Joel Hamilton and a small coterie of musicians in South Carolina. The result is a full length album, Noble Son’s first, chronicling Kirschner’s experiences in such a way they remain accessible even to those who don’t struggle with the same or similar issues. There’s a strong poetic sensibility informing Kirschner’s songwriting that never veers into heavy handed self indulgence. Instead, these songs are eloquent and vulnerable statements from an artist and feeling individual who lays open his heart on Joy in Violence in ways that will provoke and touch a wide swath of listeners.

“Problem Girlfriend” is a fantastic way to begin the album and introduces sounds that we won’t hear again on Joy in Violence. It, likewise, introduces us to the song’s lyrical mood, perhaps the most consistent element in Noble Son’s presentation. Many will hear these nine songs and the story behind the album’s writing and recording deciding, soon enough, that this is a dark and challenging work. The latter point is definitely true, There’s an air of survival, however, and definitely engagement with life even with dysfunctional results we hear in this opener and later songs. The sweetened vocal presence, often featuring harmony parts or multi-tracked passages, is an underrated part of what makes these songs go and few of the songs reflect that better than the opener. “Aces” picks things up on a decidedly low key note after the guitar driven fireworks closing the first song’s final moments. There’s a clearer focus on the lyrics than we heard in the album’s first song thanks to the sparser musical landscape and the pairing of the song’s gradually evolving percussion against Kirschner’s vocal melody is one of the song’s most important components.

Another memorable moment comes with the album’s title cut and the song’s steady push along with the bright guitar playing gives it a distinctly different feel from earlier tracks and after. Kirschner matches it with an equally energetic vocal, perfectly tempered to the tenor of the song, and making the evocative lyrics come to vivid life. “Don’t Stop (Stay Inside Me)” will affect all but the most cynical of listeners, but it’s a little jolting to be brought into such close proximity with an individual’s life like we clearly are with this song. The musical arrangement is simply beautiful. “You Are Your Mother” has a sprinkling of added sounds, but the song largely revolves the marriage of acoustic guitar and voice. The close recording of the acoustic guitar is particularly striking and gives the song a pleasant physicality it might have otherwise lacked while the careful, attentive lyric highlights the lyric while allowing it to explore its obvious emotional potential. It ends up one of the album’s most effective songs. The album is an exhausting, but never dispiriting, emotional experience. We fully enter Noble Son’s world with this release and the effect is quite unlike anything else you feel in 2018’s music.