Professor And The Madman – Disintegrate Me (CD) 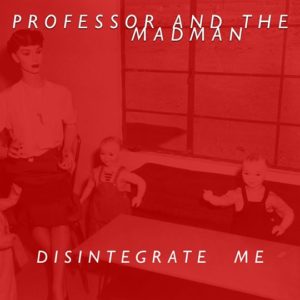 We may just be a few months into the new year, but it’s safe to say Professor And The Madman are the best punk rock supergroup we’ll hear all year. Fronted by Alfie Agnew (Adolescents, D.I.) and Sean Elliott (D.I., Mind Over Four), the rest of the band is filled out with members of The Damned, past and present – Rat Scabies on drums and Paul Gray on bass.

There are obviously plenty of punk influences that can be heard all over this one, but the band goes much deeper, mixing in classic psychedelica (“Space Walrus”), Power Pop (“Wishes”) and just about everything in between. There is also a strong Brit Pop vibe weaved throughout most of the songs here.

Elliot and Agnew taking turns in front of the mic throughout just adds to the appeal of this record. Both are strong, but with distinct sounds that serve their respective songs well. There are one or two missteps along the way, like the predictable “Machines,” weighed down with uninspired lyrics, but for the most part, “Disintegrate Me” is everything you want a debut record to be: original, experimental and memorable.