We Are The West – The Golden Shore Review 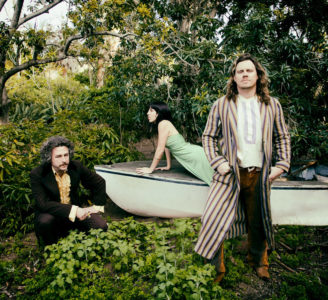 Siren is the introductory track on We Are The West’s The Golden Shore, setting the stage for a fantastically immersive and deep album. The instrumentation and the raw passion of the band’s vocals unite to make something effecting from the get go. Hints of indie, 1970s singer-songwriters, and even bits of of 1960s Dylan can be discerned during he early stages of this release. The titular effort on the album ramps up the narrative side of the band well with both the intricate bass line and the dreamy vocals furthering the story. The resulting track effortlessly moves through progressive rock and Phil Collins, while layering things in a fashion that requires fans to play the song multiple times before hearing each and every thing that We Are The West has presented.

Sea of Light (The Dirty Ditty) has a bit of horn that enters in to the mix. While seemingly small int he grand scheme of things, this inclusion makes the track  must-listen as it imbues the album with all of the 1970s coolness of acts like Jethro Tull and Supertramp. More Machine Than Man is our favorite cut on The Golden Shore. We Are The West continue to ratchet up the tempo through the two minute mark before putting on the brakes. It’s this rapid change in tempo that forces fans to really focus in on the classic / gothic sounds that the band creates during the second half.

Any Day Of the Week may be much shorter in duration than More Machine Than Man, but the track twinkles and holds tremendous depth in a fashion similar to Paranoid Android-era Radiohead. Dreamy, musically delicious, and with replay value for days, we’re all in with We Are The West’s latest album.

Top Tracks: Sea of Light (The Dirty Ditty), More Machine Than Man, Any Day Of the Week