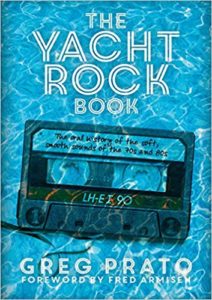 Ah, Yacht Rock – the guiltiest of all the musical guilty pleasures. That 1970s soft rock sound best associated with Southern California (though the bands were from all over). Think linen sportscoats and espadrilles; soft jazz, clean vocals, catchy hooks and maybe a little white boy R&B. Kenny Loggins? Yup; Hall & Oates? Sure thing; Christopher Cross? Are you kidding me? He had a song called “Sailing,” so, yeah; Rupert Holmes? The “Pina Cola Song” is the Yacht Rock national anthem!

Thanks to rock writer Greg Prato, we finally have the Yacht Rock Bible, told by the creators of the genre (named decades after its peak) in their own words. The Yacht Rock Book interviews a slew of musicians from that genre, including every musician mentioned above, The Captain and Tennille, members of The Eagles, Poco, America, Ambrosia and others. Prato also includes quotes from the host of the Beyond Yacht Rock podcast and the singer for the Yacht Rock Revue band throughout.

Through a series of fun, telling and remembrances, most of those interviewed for the book seem to embrace the label (though not everyone). Some of the more compelling chapters include “The Fantastic Four” (The Doobie Brothers, The Eagles, Fleetwood Mac and Steely Dan) and “Nyacht Rock” (surprisingly, Chicago is not considered Yacht Rock).

Even if you don’t enjoy the occasional soft rock jam (you’re obviously lying and we all know it, by the way), the musicians and their stories here are enjoyable enough to have appeal way beyond the genre boundaries. Climb aboard, skipper!

The Yacht Rock Book: The Oral History of the soft, smooth sounds of the 70s and 80s by Greg Prato/Paperback, 320 pages/Jawbone Press/2018