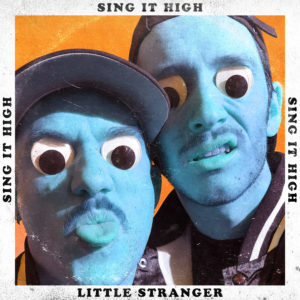 Based out of Charleston, South Carolina, the duo of John and Kevin Shields write and perform under the moniker Little Stranger and their latest single “Sing It High” will be wildly entertaining for those familiar with the duo and potentially revelatory for those encountering their work for the first time. It’s easy to hear, when you listen to this song, why Little Stranger has commanded such a passionate, albeit still small and growing, fanbase – these are songs that succeed in recordings, but must pack an absolute wallop in a live setting. Some of this, undoubtedly, is attributable to the distinctly modern edge and impossible-to-pigeonhole aspects of their songs and performance style, but it’s more a result of their command of fundamentals and how well they subvert those expected tropes for their own uses. It makes for quite a listening experience that grabs audiences from the first and keeps you engaged and entertained alike.

“Sing It High” engages with listeners from the start thanks to its attention grabbing drumming. Though the single is obviously a studio product for a number of reasons, “Sing It High” has an impressive live quality in its recording. Much of this live sound centers on the drumming and the acoustic instruments, but some of the added musical elements emerging in the song’s second half boast that same live quality as well. It’s invigorating to hear them using acoustic instruments and they mix exceptionally well with the electric instrumentation, but it doesn’t remake the musical wheel. Instead, Little Stranger develops those musical elements in a style that’s all their own and give themselves ample opportunity to flex their music creativity without ever overstepping their purview. The four minute running time of the song is a little different than what we’re used to from songs in this style, but you’ll never be counting the seconds with this song and wishing it could go on longer by its conclusion.

Little Stranger’s vocals alternate some in the beginning between clean voices and vocals altered by post production effects, but those effects aren’t distracting at all – instead, they provide a different flavor and dovetail well with some similar instances later in the performance. The presence of multi-tracked vocals and even occasional harmonies further separate the duo’s work from the rest of similar sounding acts. The lyrical inventiveness of the song is very pleasing, but it’s the arrangement of the vocal phrasing that will draw most of the listener’s attention and for good reason – it has a confidence that you hear in the music as well while carrying it off with some great melodic strength. Little Stranger’s “Sing It High” is one hell of a way to introduce their upcoming EP release Styles & Dynamics and highlights all of the duo’s best qualities while illustrating why they are rapidly becoming one of the most respected hip hop influenced acts working in any scene today.