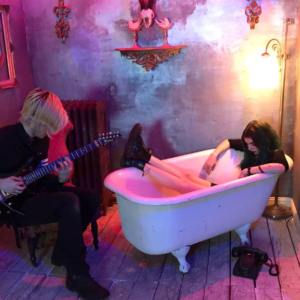 Almost Awake is an up and coming group which is lead by female vocalist Vick Liano. The energetic group hits the stage with a fresh sound which is influenced by Paramore, Nirvana, Joe Satriani, and Blink 82. The genre ranges from feel-good music to rock and roll with the hint of jazz percussion. Their music could be categorized as Alternative Rock / Punk / Rock. Almost Awake was formed in 2014 in Las Vegas, NV and signed with Tommy Entertainment.

The performers, while young, have the presence and feel of much older groups with their unique sound and stage presence. The band created by musicians Vick Liano (vocals, guitar, and keys), Grady Jones ( lead and rhythm guitars), Gabe Conover (drums and vocals), Addison Egelhoff (Rhythm guitar, keyboards, vocals), and Tommy Cochran (bass) collaborated in the creation of the song “Cloudwalker.”

The band as a collective wrote “Cloudwalker” about the hardships of growing up and the conflicts life contains. The lyrics reach beyond the tweens, and young adults as many adults can relate as well. The words are set to commanding guitars serving as solid instrumentals, and the firm voice of Vick Liano. The song opens with soft guitars and rolls into heavy metal sounding drums and guitars riffs. Liano’s voice is powerful blending with the combination of electric guitars, bass, and drums. They seem as though they have been professionally trained becoming a seasoned group. The production and recording quality is excellent.

“Cloudwalker” lyrics talk of the struggle of growing up almost invisible. Liano sings of missing others, no longer caring, seeing right through another person’s words, of being bullied, the tragedy of loss, of not being visible to the world around you and needing to be missed. These words reach across the generations touching the soul and rocking it with the music which backs her. You can see and hear the strength in her as she sings each lyric.

Almost Awake has sold out headlining shows in Las Vegas at venues such as The Hard Rock, and has toured the west coast with The Extreme Tour. Live Nation selected them as one of the most promising young bands for 2015, Music Forward Foundation. This is a band to watch over the next years.

The market range for Almost Awake ranges from Tweens to Young Adults, however older listeners enjoy their music as well. The melodious vocals reach many age ranges and loyal followers being established.

Their current tour dates include May 9 – The Rebel Lounge in Phoenix, AZ, May 10 – Beauty Bar in Las Vegas, NV, – May 19 Jersey Shore Festival in New Jersey, NJ, – July 21 – Joshua Fest – Plumas Sierra County Fairground in Quincy, CA with tickets available through AmostAwake.com. You can purchase the song “Cloudwalker” by Almost Awake currently on Amazon.com, Apple Music, and Spotify, and ReverbNation.

Connect with them through their media presence as well as their website AlmostAwake.com. For book information for the band Almost Awake, please contact Tommy Boy Entertainment. They are a band to watch as their styling matures and they touch bigger and bigger audiences.