Cat Thompson – Be Mine 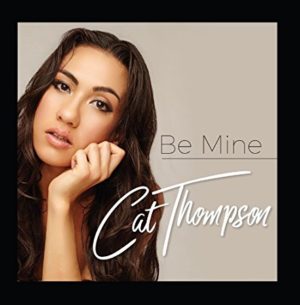 Cat Thompson’s inexorable rise into the heights of pop stardom makes another surge with the release of her latest single “Be Mine”. It’s a spectacular follow up to her previous single “All I Need” and positions the Australian born vocalist and songwriter for a 2018 run promising to bring her closer than ever towards achieving the global recognition and success she deserves and craves. Her multi-cultural frame of reference imbues her with an unique range of musical talents and she’s built a reputation of dynamic live performances delivered with passion and pacing likely capable of exhausting even her most talented contemporaries and peers. The confidence she exudes during the recording “Be Mine” is palpable and far beyond her years. This Australian born half Irish/half Filipino singer/songwriter is currently readying her new EP for release and it’s safe to assume we should consider this single as a preview of what’s to come – if so, Cat Thompson’s 2018 stands to be her biggest year yet and one potentially sending her career into the stratosphere.

She has the easy, unassuming air of a pop princess combined with the weightier grace of an experienced and emotionally versatile performer. Thompson really gets under the skin of this song and her interpretation of the lyrics is, if nothing else, informed by similar experiences she’s endured and natural artistic imagination. She possesses an unerring instinct for the song’s needs and applies her talents to the finished product with an even hand intent on serving the track first and foremost rather than dominating it with the raw power of her voice. There’s an unusual balance between the backing track and her voice defining the song as a whole and, as a result, both of these primary elements dovetail seamlessly into each other without a hiccup or discordant note heard by the audience. “Be Mine” has a vocal that sounds like Thompson cut it in a single inspired take and it holds your attention from the beginning.

The musical arrangement is likewise strong. Thompson’s single combines a little traditional instrumentation with a largely electronic array of supporting instruments, but there’s warmth surrounding the arrangement cutting against popular misconceptions of electronica producing a cold, comparatively inhuman sound.  It’s notable how, rather than layering the track with an assortment of bells and whistles, Thompson and her collaborators pick instead to keep this arrangement focused on an array of key elements and the choice pays off well for both the performer and listener alike. A final important factor in the track’s success is how that focus extends itself to the song’s ideal running time of just under three and a half minutes. Taken in total, Cat Thompson’s “Be Mine” is a fantastic single in every way and is further distinguished by a thoroughly modern sound that brings the composition to vivid life. It’s a powerful example of what modern pop is capable of.