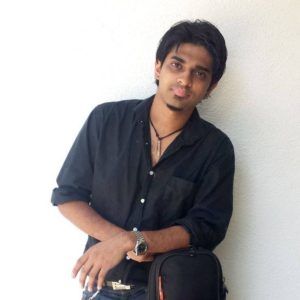 We had a few brief moments to sit down with Nipun Nair (NOOP) a few months back and had wanted to provide our readers at NeuFutur with a bit of additional information about the performer.  Wearing a composer hat alongside the aforementioned turn as live musician, it becomes clear that all things music flow through Nipun’s body. The next thing that becomes readily apparent is that the amount of influences that comprise Nipun’s unique take on music is formidable. It feels as if a wholly different set of sounds and approaches bubble through whenever one plays another track from the corpus of Nipun’s discography. The composition for “Beneath the Surface” ebbs and flows, showcasing considerable gravity through decisive compositions. The effort is perfectly polished, with the resulting effort of equal quality to fare released on new age/film score labels (e.g. Silva Screen, Real Music).

The eclectic sound of E-Volve deftly ties together electronic, funk, blues, progressive rock, and guitar-heavy rock in the vein of Stevie Ray Vaughn and mid-1970s Genesis. The depth of the composition ensures that listeners will be able to play the cut multiple times before ever hearing all of the nuance and style that was weaved within.

Nipun Has had ample opportunity to let his creative juices flow beyond the NOOP project. For example, he was able to contribute mightily to [NO ROBO’s SXSW performances earlier in April. Perhaps most exciting, Nipun is working with GrooveMartini, a taut, funky band that is able to refresh the Billy Preston / Parliament sound of the early to mid seventies. The act is able to create thoughtful, deep, and detailed compositions while having a very friendly and slick sound. Based on the numerous live recordings that are available, we were transported into a delightful blending of Nipun’s guitar work alongside assertive drums, strong female vocals, and a slew of additional contributions from the rest of the act.

For additional information about the performer, do check out the multiple websites and social media profiles. There are samples of covers and original compositions from Nair at his SoundCloud. Check out the embed below, which is a set of compositions Nipun has laid out for a variety of distinct projects.

Leave a comment if you’ve had a chance to listen to NOOP; what was your favorite composition?