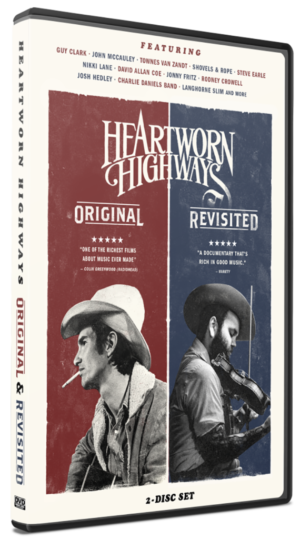 Just a couple years past the 40th anniversary of the iconic documentary, Heartworn Highways, filmmaker Wayne Price sets out to recreate, at least in spirit, one of the best documents out there on the Outlaw Country music movement. Heartworn Highways Revisited, much like its predecessor, focuses on a handful of country musicians (or at least country-ish, with elements of folks and even rock) creating their own path, outside of the mainstream. There are fantastic interviews with folks like Robert Ellis, John McCauley, Shovels & Rope, Shelly Colvin and others, and even more performances. He also brings back Guy Clark, Steve Young and David Allan Coe, all subjects of the first Heartworn Highways documentary.

While the once hard-to-find Heartworn Highway (originally released in 1981) is legendary thanks to the off-the-cuff interviews with some of the best underground country musicians at the time (Townes Van Zandt does his interview walking around the outside of his trailer in the cold, holding a rifle, a can of Coke and a bottle of whiskey); but more importantly, it’s the live songs and jams that director James Szalapski captured here that makes this film so memorable, so many decades later. It is, however, admittedly difficult to follow at times given the meandering nature of the timeline, with little exposition as the director moves from one subject to the next. The scene at the end, however, with many of the profiled musicians sitting around the table at Guy Clark’s house singing songs, including “Silent Night” is simply amazing. Though barely spotlighted in the documentary, at the end of the table is a very young Steve Earle, guitar in hand, singing along with the others. That shot alone makes this doc required viewing for any music fan.

The combined influence of the musicians from that original documentary – Clark, Van Zandt, Coe, Earle, Rodney Crowell – is immense. Their sounds can be heard in hundreds of musicians that have picked up the Outlaw Country and Americana banner in the decades since this film first came out. You can certainly here those influences in the voices of the up-and-coming generation of singer/songwriters profiled in Heartworn Highways Revisited.