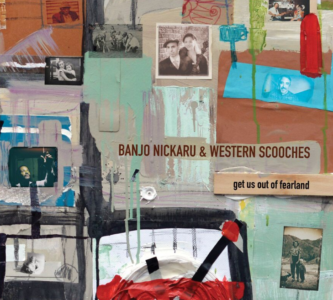 Soar is the first effort on Banjo Nickaru & Western Scooches’s Get Us Out of Fearland, immediately bringing listeners in to a modern take on bluegrass with confident vocals, careful instrumentation, and a bouncy melody that will stick with listeners long after the effort ceases to play.

I Wish The World Knew Why begins in a more laid-back, slower format. The same intricate sound first broached by the act during Soar is continued here, but the resulting effort could not sound more different. The dynamic between the guitars and the vocals lays out an alluring narrative. Get Us Out of Fearland speeds things back up, with Banjo Nickaru standing boldly against any challenge that may be faced. During this single, there are nods to more blues and soul styles. It is this slight shift that keeps the momentum of the album high.

I Don’t Need No Glasses is another stylistic shift for the band as the act is able to call forth a hint of the pop from the first half of the 20th century with just a trapping of country & western. Don’t You Follow Me, the penultimate track on Get Us Out of Fearland is an effort that showcases Banjo Nickaru & Western Scooches’ ability to lay out a brooding, foreboding sound to their music. It is rare to hear such an earth-shattering track in the late registers of an album, but the act is able to conclude their release in a fashion as strong as it had opened. Park Song goes back to the soulful, bayou-adjace sound that came forth earlier in the release. The hopeful, fun sound of the song is a fantastic way to put an emphatic end to the release.

Top Tracks: I Wish The World Knew Why, Get Us Out of Fearland