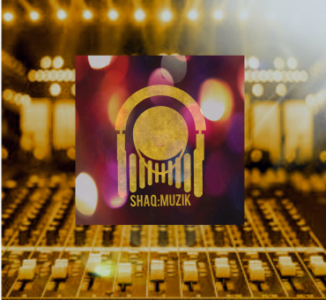 In his first single “My One & Only Love,” ShaQ:Muzik gave us an incredibly intimate and wildly sonic love song that got R&B and electronica fans very intrigued with his unique blend of slick, stylish grooves. The track shimmered with what seemed like a million different colors colliding into one another like a reckless but loving embrace. It was a feast for our ears, and he made sure to keep us interested when he cut “Let Me in Your Heart Again,” a slow, churning psychedelic ballad that erotically captured the affections of critics throughout the European market and even found its way to the shores of the American indie underground. Which brings us to his latest, most polished release yet; “Get Down,” a track that shows us that ShaQ:Muzik knows how to dance and throw down some up-tempo beats in addition to his trademark soulful crooning.

I’ve been following this artist for a minute, and to be truthful, I’d totally support a campaign to get ShaQ:Muzik into the sound tracking business in Hollywood. I say that mostly because his soundscapes (which are what his singles really are when you analyze them closely) are so ethereal and easy to get lost in that they would almost too perfectly accompany those film scenes where dialogue isn’t enough to capture the passion between two lovers or the grief of someone mourning the loss of a dear friend. He lets his vibes do all the talking for him, and his evocative vocals only add to the smorgasbord of heavenly reverberations we find in his work. In “Get Down,” we get to see the Europop influence on ShaQ:Muzik’s style on full display, accompanied with some jarring harmonies that are almost too potent for casual speakers to be able to withstand. This is a really relentless track, much more ‘fast and furious’ than any of his previous work, and while it jets out in a slightly different direction than his more romantic ballads he’s been known to pen in the past, this is still an incredibly welcomed development.

The hallmark of a truly talented artist is their ability to always grow, adapt and evolve from where they started out from, regardless of whatever style of music they choose to record and perform. While it’s nice to have consistency in our favorite artists, just for the sake of having a reliable go-to when it comes to finding something cool to listen to, it’s a whole different story when an act just gives up and continually goes back to drawing from the exact same sources and trying the same previously successful formulas over and over again to no end. That “as long as the bills keep getting paid” sort of lazy mentality that we find in our most banal, overplayed bands and artists doesn’t last in the fast paced market that the music industry is today, and it’s thanks in part to people like ShaQ:Muzik. As long as there are artists that are devoted to making organic, unfiltered jams like “Get Down,” the airwaves of specialty and college radio will never become stagnant.