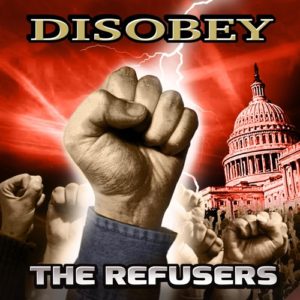 Disobey is the third album from the Seattle band The Refusers and solidifies their position as one of the more politically active rock bands in recent history. They’ve garnered considerable renown as a band opposed to vaccinations, distrustful of virtual any organized institution in American life, and clearly of the opinion that we are getting the collective shaft as a nation. They bring us into their world from the first track, “Playing with Fire”, and it’s a blood-shot eyed howl of rage about living in an unjust world where the masters of our race treat impending disaster for our world and the masses with a cavalier attitude. Michael Belkin’s guitar work is edgy enough and never takes any extended lead breaks. Instead, the band opts to build around straight forward guitar riffs and steady, no frills drumming. The title song is one of the best reflections of that approach, but the main riff driving the tune and the vocals possess an inspired energy different than we hear from any of the other already fine songs. “Eruption” succeeds thanks to a similar groove oriented approach and some stellar bass playing from Steve Newton. They subvert expectations a little by pairing a volcanic title with a relatively low-key, lightly funkafied performance.

“Fake News” marries some post punk spirit with hard rock fundamentals for a powerful arrangement, yet the song tackles such a divisive issue that it might have been a mistake to include it. Balancing the need to draw as wide of an audience as possible with saying what you need to say as an artist must be, at least, a  light but constant struggle for the band and the band does as good of a job as possible positioning the message against an impartial and ballsy rock and roll attack. “My Baby Loves Rock and Roll” is a welcome respite from the band’s concerns about modern life and embraces pure rock and roll bawdiness in a familiar musical and lyrical setting. Despite this song clearly not remarking the wheel, The Refusers prove they do have a talent for pouring old wine into new bottles.

“Free the Captives” returns the band to their customary subject matter, but they slow things down compared to most of the tunes on Disobey and clearly focus more on making the most of the track’s dynamic shifts from light to shadow. You may not expect it, but there’s a lot of surprising nuance heard on this release and the musicianship is higher than we hear on many of the already exceptional earlier tunes. The final number on Disobey, “Emancipation”, is a perfect choice for the band to make an emphatic last statement on the album and highlights the deceptive hopeful message that’s a significant part of the band’s revolutionary rhetoric. The Refusers’ nine song album Disobey is another fine entry in the band’s growing discography and has a lot to offer even if you disagree with its politics. Eight years since their formation, it’s becoming increasingly clear The Refusers can lay claim to being one of the best indie rock bands working today.