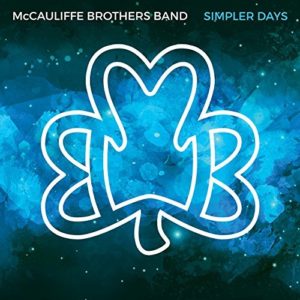 There are a number of themes that are promoted prominently through Simpler Days, the new album from Chapel Hill (North Carolina)’s McCauliffe Brothers Band. Nosedive, the album’s first track, is a perfectly-polished piece of alternative rock. There is a good amount of mid-to-late nineties rock threaded through, with a set of vocals put at a focal point as introspective guitars, bass, and drums create a supportive backdrop. Light of Day comes forth with a hint of reggae and ropy bass, showcasing a raw passion that will resound with a large swath of listeners. With hints of 311 and Sublime, this second single from Simple Days is a cut that one could easily imagine on rock radio and Spotify playlists.

You’re Gone starts with an instrumental section that is as rich and emotion-filled as any set of vocals. During this effort, the McCauliffe Brothers Band are able to call back to The Eels and Muse. This is a must-listen on Simpler Days as the band showcases their ability to keep listeners on the edges of their seats. As the single continues to play, the track gradually increases in momentum until a fuzzy hurricane of guitars, emphatic bass, and splashy drums threaten to sweep listeners away. Soon after, the vocals are able to draw things back into the same deep and contemplative sound that began You’re Gone.

Out of My Hands has an otherworldly sound to it that is driven by the guitar and drum dynamic. With nods to the progressive/rock sound of peak Pink Floyd and to the Goo Goo Dolls, this effort is able to speak volumes. A timeless sound ensures that the cut could fit easily in the 1970s, 1990s, and today. The dynamic between the constituent elements of the band ensures that listeners can play Out of My Hands multiple times and continually find new twists and turns that are hidden below the surface.

Endlessly is a rare example of a later-album track that is able to hang with the first few efforts on an album. It seems all too common that bands put their weaker efforts towards the ends of their releases, but this track is careful and delicate in all the right ways. The vocals do more than tell a story as there are building the harmony alongside the twinkling guitars and the punctual bass that is threaded into the effort. An intense bass line at the 2:20 mark is precisely what Simpler Days needs as it amps up the momentum of the rest of the album . As fans are locked in firmly to their seats for the remainder of the disc, the McCauliffe Brothers Band are able to finish things up masterfully.

To You has the McCauliffe Brothers Band add a bit of funk into the mix. The laid-back and fulfilling tack taken here allows the drums to set the stage while the guitar fills in any gaps. Additional vocals are used to great impact during To You, providing highlighting at a precious few moments. This decision is paralleled during an intense bit of guitar / bass interactions that come into view just a bit before the two minute mark. This is a single that could easily have came from The Barenaked Ladies twenty years back, but there is an honest and earnest sound that will cause fans to fall in love with the McCauliffe Brothers Band today.

Time of the Night has a slinky, retro-infused sound that hearkens back to the eighties and nineties. In what has to be a first, there’s a simultaneous adoption of peak Police and Matchbox 20; what issues forth during the penultimate track on Simpler Days is something so new and exciting that we’ll be expecting great things from the band in the future. This album concludes with Stay, a musically-complex track that will require one to strap on a pair of headphones to fully understand everything that is going on. While the track can be appreciated on the surface level, I feel that this last track occupies a very important position. It does more than just put the brakes on all of the tropes and styles that The McCauliffe Brothers Band had made so far, but it introduces some new sounds and approaches that we can only hope will be put onto a future recording.

Top Tracks: Out of My Hands, Light of Day, Time of the Night