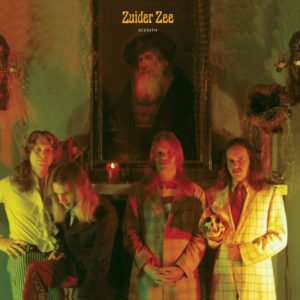 There are sadly way too many stories out there similar to the tale of the boys in Zuider Zee. A Memphis-based power pop band that started recording in the early 1970s, Columbia Records released their one and only album in 1975, a self-titled LP that should have been big, considering the success of other power pop like Cheap Trick, Badfinger and The Raspberries. The band also curiously opened for the Sex Pistol in Memphis – one of only a handful of U.S. shows before Johnny Rotten and his pals saw their band implode spectacularly just a few shows later. But, Columbia never even bothered to release a Zuider Zee single to radio. Combine that label apathy with a bizarre stabbing of their bassist as he caught thieves trying to break into their van to steal equipment, Zuider Zee dissolved by the late ‘70s.

Thankfully, the saviors of the forgotten and criminally under looked, the folks behind Light in the Attic Records, have re-released a lost Zuider Zee gem; Zeenith is a completely remastered set of a dozen songs recorded by the band between 1972 – and- 1974. None of these songs have ever been officially released until now.

The album manages to seamlessly bridge the Glam Rock world with Power Pop. Though a handful of tracks sound a little dated, like the organ-drenched opener “Haunter of the Darkness,” for the most part, the album boasts a timeless quality making this record just as relevant more than four decades later than it should have been if it got a proper release in the ‘70s. The band impressively wields razor sharp pop hooks as easily as they toss out harmonies that would make The Beatles jealous. This stellar set is completed with a dense booklet of photos and liner notes from writer/musician Alec Palao putting the band’s (should have been) legacy in proper perspective. It may have taken decades, but the band is finally getting the attention they deserved all along.