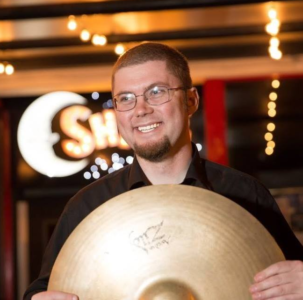 Steve Wheeler’s EP release Terminal Velocity marks a divergent point for this talented composer when he affords himself the opportunity to step away from his “day job” as a media composer for major network sporting events and video games in favor of a more personal project. The instrumental EP is brief, only three songs and running less than ten minutes, but Wheeler’s writing makes the sort of impact music tailored to accentuate sports programming can’t hope to equal. The personal investment in this music is, ultimately, the deciding factor alongside the removal of arbitrary borders he’s forced to observe when building compositions for NCAA or PGA events, among others. The Orlando, Florida based musician distinguishes himself here. Terminal Velocity deserves mention as one of the year’s finest instrumental efforts.

It’s easy to hear that Wheeler has a strong classical background. The EP’s opening songs reflect this most strongly, particularly the second, but the title song Terminal Velocity opens on a monumental note. Wheeler imbues his compositions with fiery percussion that hits harder and sounds more dangerous than anything you’ll hear from staid traditional orchestras and proves to be one of his best tools for invoking mood over the course of these three cuts. There’s synthesizer and keyboard sounds working their way through the title number, but it takes on an even bigger role with the EP’s second song “Fist of the Heavens”. The drumming on this song pounds even harder than before but, it can’t compete with the seeming banks of horns and full on classical instrumentation largely defining the song. Wheeler’s talent for bringing seemingly mismatched styles like modern synths and post-production effects into full accord with classical touches creates something uniquely his own and should captivate the imaginations of casual and obsessive music listeners alike.

The EP’s last song “The Endless March of Time” dispenses with the dramatic percussion style of the earlier songs in favor of a stronger emphasis on synthesizer and keyboards. The electronic character of the song, however, doesn’t mean that this song has a cold, sterile sound – indeed, it has a reflective emotional weight from the first and the music’s light touch during the song’s first half is a notable change from Terminal Velocity’s first two cuts. It takes a turn into shadowy territory after the mid-way point and, by its conclusion, should impress you as the EP’s most fully realized effort, unified in a way the earlier fine pieces aren’t, and deserving of the final slot on Terminal Velocity. Steve Wheeler’s EP deserves to get wide attention and perhaps, if it does, the plaudits sure to pour in will encourage him to develop these ideas into further. Terminal Velocity is a music treasure waiting you can plunder again and again without ever exhausting its riches.