The Filaments – Look To The Skies (Vinyl)

Posted on: July 28, 2018 Posted by: John B. Moore Comments: 0
Tags: The Filaments, The Filaments look to the skies 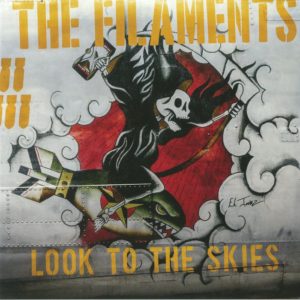 England’s classic street punk torchbearers The Filaments had a couple of solid releases under their belts before calling it a day in 2005 when their singer emigrated to the U.S.

But with atrocities and injustice ripe for railing against, steadily building up, the band reformed a few years later. Look To The Skies is their first official coming out record since the reformation and damn is it a great one. A clarion call for the disenfranchised to wake up and speak out, this record could not have come at a better time.

Across 11 tracks, the band deftly and feverishly blend classic British punk rock, ska and flashes a psychobilly for their most energetic and consistently satisfying album since their original founding. From the opening chords of the brilliant anti-MAGA hat wearers anthem “Fuck the Alt-Right,” through to the final ringing of the crash cymbals of “Killing Machine” there is hardly a moment to breath in between; Just righteous indignation delivered in impossible to resist punk rock anthems.

Glad to have you back!