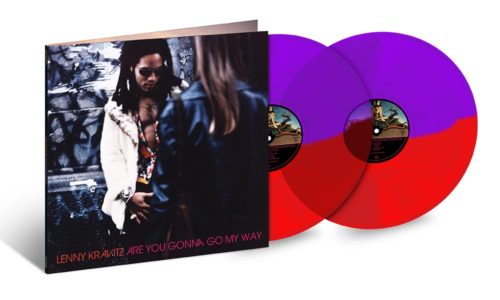 Lenny Kravitz’s 1989 debut, Let Love Rule was an impressive win for rock. Aside from, Guns ‘n Roses and a few others, radio and music charts were dominated for most of the year by mediocre R&B singers, stale soft rock holdovers like Phil Collins and Billy Joel and legitimately fake music acts like Milli Vanilli. So, when Kravitz, with his rock swagger meets hippie vibe came out with the soaring 5-minute plus title track and the brilliantly confrontational “Mr. Cab Driver,” both off of “Let Love Rule,” mediocre radio pap made way for a legitimate rock guitarist (for a while at least). It certainly didn’t hurt that he also had that perfect rock star look.

Let Love Rule has its 30th birthday coming up next year, so UMe and Virgin are going all out with a special run on vinyl this November. Impressively, no two color-variants will be the same, as the label is making 50/50 semi-transparent brown and yellow sets.

Although, you still have to wait a few months for that debut record to get the proper vinyl re-release treatment, the label is also putting out the four follow ups to Let Love Rule (originally out between 1991 – 1998) this month. Of the set, Mama Said and Are You Gonna Go My Way are nearly as prefect as the debut. The other two, Circus and 5 each have their moments, but never manage to live up to their predecessors.

A lot mellower than his debut, Mama Said is still an overwhelmingly great record that holds up nicely so many decades later. “Always on the Run,” co-written by and featuring guitar from Slash and the slow funk of “It Ain’t Over ‘til it’s Over” go to show the range Kravitz could bring. Even stronger is 1993’s “Are You Gonna Go My Way.” The blistering title track alone is worth the cost of the album, but elsewhere, Kravitz channels everyone from Prince to Curtis Mayfield.

Just a couple years later however, with 1995’s Circus and 1998’s 5, Kravitz seemed to be running out of inspiration with a mix of songs off both LPs that sound like little more than castoffs from the first three records, missing strong hooks and Kravitz over all glam style. Kravitz recovered and got better on his next release.

All four of these records are getting the proper updated treatment, coming out on 2 LP, heavy 180-gram black vinyl. In addition, there is a limited run of individualized color variants. Mama Said and Are You Gonna Go My Way, are both must-haves for any music fan with a turntable, while Circus and 5 are strictly for diehard fans and completists.