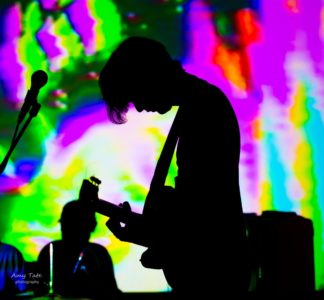 The Fibs come out of their corner swinging with this self titled sophomore release. “Waiting for a Train”, its title alone, recalls a vast tradition in 20th century songwriting that, despite the enormous stylistic differences, that The Fibs sustain for a modern audience. The singer and chief songwriter behind the band’s creativity, Preston Newberry, writes lyrics brimming over with a lean literary quality that makes for a notable contrast with the band’s musical identity and that dynamic fully evident in the album’s opener. It continues with the album’s second song “Cut Hands”, an even clearer invocation of the dark wave influences powering this ten song collection. The production for this self-titled effort often shifts focus from a mix placing the singing in a prominent position or else submerging Newberry’s voice under a wave of effects and instrumentation and “Cut Hands” certainly favors the latter approach.

The collection, with a few notable exceptions, tends to favor songs clocking in less than four minutes and this keen-eared craftsman-like approach grounds the compositions with solid fundamentals. Strip The Fibs’ music of its effects and production gloss and you’ll find a muscular rock album with understated melodic strengths. Jen Rux’s bass playing on “Stella” gives the album’s fourth song an immense heart beat and strong spine without ever shifting the focus away from the song’s other elements. Newberry’s chief collaborators in The Fibs’ musical experience, the rhythm section including Robby Rux on drums, produced the album as well and, therefore, prove essential to the album’s sonic architecture. Though Newberry pushes back against overtly identifying his influences, there are definitely traces of Echo and the Bunnymen, among other acts, running through these songs, but “Stella” boasts unlikely similarities with classic Cure, particularly in the downcast quality of Newberry’s vocals and the hypnotic spin of its arrangement.

The band’s two guitar sound is highlighted with the track “Lexicon” and it rocks out more convincingly than any other tune for me. The Rux’s production style is well suited to capturing the guitar sound on this effort – high strung, restless, and slicing out of the mix with slashing chords and jagged lead work. Joel Raif’s lead playing, likewise, makes this one of the album’s potential sleeper gems. “Chicha”, the album’s shortest tune at two minutes fifteen seconds, has a hallucinatory Tex-Mex accent to the main guitar figure and Newberry’s woozy vocal ratchets up the song’s intensity without ever sounding over wrought. Robby Rux throws some key rolls into the song that give it an added propulsive edge. “Sapphire Eyes” has an elegiac touch, thanks to both the writing and production, quite unlike anything else on the album and Newberry’s echoed vocals demonstrate a sensitivity we don’t readily hear in the earlier tracks. The lyric imagery and musical mood satisfyingly sync up without one ever competing for prominence with the other. Indeed, everything about The Fibs’ second studio album feels much more realized and deliberate than the band’s first release Hex Hex Hex. The Fort Worth, Texas based quartet has grown by leaps and bounds in artistic potential since their 2014 debut.