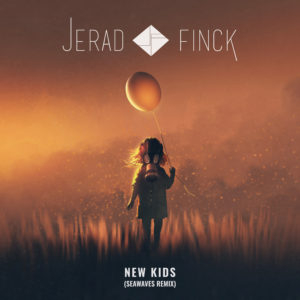 If you’d asked me whether or not I knew who Jared Finck was just a little over a week ago, I would have had to tell you that I had never heard of him or his truly profound musical catalogue. But recently I came into contact with “New Kids (SEAWAVES remix)” while exploring for new music, and I couldn’t help but be taken by the charmingly relevant nature of both the lyrics and the music that Finck composed in this powerful slice of indie pop/rock. To say I’ve become a fan since would be a complete understatement, and I’m confident that if “New Kids” gets the proper exposure that it’s entitled to, the rest of the world will be singing Finck’s praises as well.

“New Kids” is stylishly produced and remixed by the aforementioned SEAWAVES, who make their presence known within the first few seconds of the track, but this version of the song doesn’t take anything away from Finck’s touching original (which racked up a couple of million hits on Spotify alone). Along with its accompanying music video, this single was designed with the sole intent of getting listeners actively thinking about the validity of having firearms openly available to the public and whether or not we’re okay with living in a world dominated by guns. Finck might have created this track to give Everytown.org the exposure that it needs to make good on its mission to rid the world of such cruel violence, but he goes well beyond in evoking a lot of emotional imagery along the way.

To my own ignorance, the buzz surrounding Jared Finck hasn’t just been limited to this single, but to an ever growing interest in his entire body of work, going back to his acclaimed debut in 2009. I’m actually quite surprised that he hadn’t come to my attention sooner, but the reasoning behind his somewhat enigmatic profile in mainstream music is perhaps as thoughtful as the lyrics in “New Kids” are. He’s had every chance in the world to depart from his grassroots sound and chase the paper with pop music’s heavyweights, but for him, respecting the integrity of his music has always taken precedence to the big paydays and additional screen time that come with keeping your head down and playing to someone else’s beat.

I would love to hear more collaborations in the future between Finck and SEAWAVES, as they clearly have got the chemistry and the fiery compatibility to discharge some serious whirlwinds when they get cooking in the studio. A truly gifted artist is able to work with virtually any counterpart and find a way to create something organic, friendly and inviting every time just the same, and while I’m still new to the world of Jared Finck, my gut tells me that he would be a success in almost any medium he chose to approach. Time will tell for certain, but if his next release is as captivating as this remix of “New Kids” is, you can bet I’ll be writing a lot more about this gentlemen as we enter the next epoch in pop music.