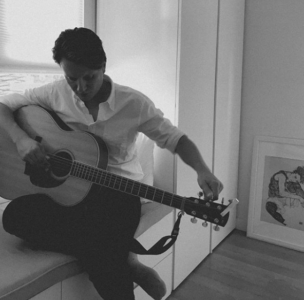 Jim Clements’ latest work of art A Failure might have the most deceptive title in the world, but it starts off in more honest, plain speaking tones than any other album I’ve spun in the folk genre in at least ten years’ time. “Saul’s Blood (A Dream)” acts as our foray into the monumentally euphoric eight track swan song by instantly capturing the full extent of our focus with a staggering guitar rhythm that sears its endless melody into our minds like a hot branding iron. It sets the stage for the melancholic “Not a Lot of Blood” to creep across our speakers like a lost soul looking for a comforting face among all of the death, despair and depravity he’s had to endure.

“The Comet I Was Waiting For” slides into our consciousness with the grace of a classical ballad, airily descending from the heavens and arriving before us eager to play out its elegy. The timber of Jim Clements’ voice is the only beacon we have to cling to as the piano crushes any glimmer of optimism that may have otherwise grown formidable in the music, but we aren’t afraid. We’re right there beside Clements in the eye of the storm that A Failure is invoking around us, and he isn’t about to let anything bring us harm. The gallop of “I Am Here For You” injects a sense of urgency into the middle portion of the album that pushes us into the pop swagger of “The Backup Plan” so seamlessly that it’s almost hard to tell where one of the two gorgeous ballads ends and the next begins.

“The Backup Plan” utilizes Clements’ unadulterated passion for blending old school folk song structures with a contemporary swing that makes his sound iconic, almost hallowed when we hear it in this excellently produced setting. It does absolutely nothing to prime us for the rabid dirge of “Why You Scream in the Night,” which recalls the southern crooning of Dax Riggs and the removed solitude of British singer/songwriters like Alex Dingley and Howard James Kenny. A Failure isn’t one of those streamlined acoustic indie records that has polluted college radio in recent years – it’s a starkly surreal, somewhat neo-noir interpretation of the angst that has been pent up in this generation for far too long and is finally reaching a climax in 2018.

As the album winds towards its dramatic conclusion Clements throws yet another layer of smoke in our direction with “The Advice Song (Just Give Up),” which can have multiple meanings depending on the context in which its played (not unlike the bulk of material that we find on A Failure). If this were intended to be heard as a concept piece it would serve as the unbreakable bridge between the record’s stoic opening seven tracks and its cinematic closing eighth track “Fire Engine Blues,” which brings us completely full circle and releases all of the frustration, anger, depression, pain, sorrow and longing that has grown in the previous songs. Jim Clements’ new album isn’t just the most beautiful record I’ve heard in the last couple of years, it’s a treasure chest of emotional confessions that bring us a little closer to the greatest folk musician alive today.