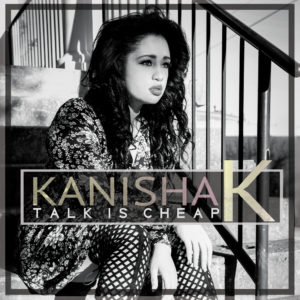 This is a great “I’ve had it with you” song, maybe the best in a long time. Kanisha K is frequently classified as country music, but there’s a tangible rock and roll spirit beating inside of the song as well. The instrumental elements running through the song like banjo point the way towards a history steeped in such sounds, but the lead guitar work recalls blues rock and hits the right spot without ever over-exerting for listener’s attention. Kanisha K and her collaborators are clearly focused on making this a full-bodied musical experience and the addition of acoustic guitar in the song gives experienced listeners an aural glimpse of the song’s likely beginnings and makes an even deeper impact on the audience. The song runs just a hair under three minutes thirty seconds, but it never comes off as anything less than a fully realized and often cinematic effort.

You can hear the cinematic leanings of her performing and songwriting style in the adroitly placed crescendos in the arrangement and the wide eyed assertiveness of the song’s chorus. The song’s lead guitar work becomes more and more involved as the song progresses, but it’s guitar playing placing more value on the notes it doesn’t play rather than cluttering up a deceptively nuanced performance. The banjo’s prominence in the mix ebbs and flows during the song and matches up well with the acoustic rhythm track and aforementioned lead guitar. The only relatively extended solo break comes near the song’s end and it provides a graceful bluesy coda for the track.

Kanisha’s voice explores her emotional range in full. She’s a canny singer, so long after first beginning to use her gift as a young child, but she’s able to transmute her life experiences and dramatic instincts into the way she attacks her lyrical content and it’s a rare skill. Some of music’s finest technical singers are incapable of projecting much charisma or implied storytelling into their work, but Kanisha’s voice shines in every way during the shifting moods of “Talk is Cheap”. When she unleashes the full power of her voice, however, she commands your attention and drives home the song’s message with undeniable fire.

It’s the newest single in a string of such releases. This approach to conquering the music world is bearing fruit for Kanisha K and there’s no way telling what her future intentions might be, but she clearly has the talent to record likely substantive, powerful, and successful longer releases. No matter. “Talk is Cheap” is a single of rare power, style, and intelligence with a melodic sensibility that’s impossible to ignore and difficult to dislike. If Kanisha K continues surrounding herself with the best collaborative talent the music world has to offer, she will flourish more and more with each successive year and outpace even the meteoric quality of this new single.