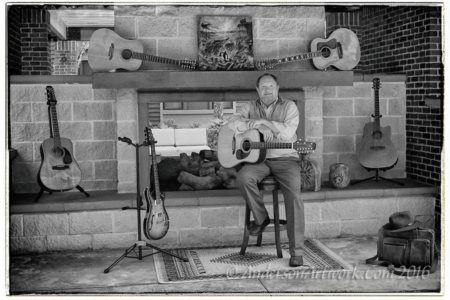 Bill Abernathy’s new album Crossing Willow Creek is a diverse fusion of styles that all share something in common with the fabric of Americana, and fans of his last LP Find A Way will be more than pleased to find the themes of that record greatly expanded upon in this one. Abernathy touches on a lot of ground with this release – from old fashioned country swing to electrified blues rock – but none of it feels forced or artificially tailored for the contemporary market. There’s a natural feel to all eleven tracks that Crossing Willow Creek contains, stemming from a collection of organic lyrics that will make you stop and think about our present state of affairs in America just as much as they will evoke retrospection and self-analysis with their thought provoking verses.

The contrast between the heavier material and the acoustic fodder isn’t a stark one, but it definitely adds a texture to the fluidity of this album that I don’t disapprove of. Tracks like the countrified “Changes,” sax-laden “White Knight” and party rocker “Whiskey Road” shake the floorboards beneath our feet in a very focused manner, and even at their most raucous and wild they never quite get out of control. Everything is meticulously synchronized in Crossing Willow Creek, and it’s overwhelmingly obvious when we listen to lighter material like “Any Port,” “Meant to Be,” and of course the unforgettable “Love’s in Vain.” Unlike the electric jams, these tracks are very quaint, understated and crisp – but nevertheless share the same studiousness in their design as the rock-heavy songs do. A consistency between all of the material is there, but the play doesn’t feel repetitive thanks to the sundry of styles that it navigates with ease.

There’s no getting away from the guitar presence on this record, namely in pointed blues numbers like the self-explanatory “Yuppie Blues.” In this track, which I would argue is the most brilliantly produced on the entire record, we get a grasp of just how serious a blues junkie Abernathy really is. He takes a step back from the spotlight and dispatches his lyrics from the darkness, letting the guitar play take center stage and throttle us with its superb translation of raw emotion. The lyrics are politically charged in the same style as the more muscular “Cry Wolf,” but they’re not quite as brutal in their tone as the music is, which gets us into a chokehold early on and mercilessly pummels us with rhythm.

We never encounter a moment where the passion fades from Bill Abernathy’s voice as he croons through these deeply personal lyrics, which is nice considering this album’s sterling size. As ambitiously crafted as it is, songs like the gorgeous 12-string-led “Willow Creek” and the opening sizzle of “Can’t Go Back” make Crossing Willow Creek feel so modest and unintimidating for casual folk music fans. Just in sampling from the rustic “Icarus,” it’s clear for anyone who has been following Abernathy since his debut as a recording artist that he’s grown and matured a lot as a songwriter in the last year especially. His content is well-rounded on all fronts, and he’s not afraid to experiment with every part of his sonic profile. I like where he’s going with his sound in Crossing Willow Creek and honestly can’t wait to hear what he does with it in future recordings as well.