Hamell On Trial – The Night Guy at The Apocalypse: Profiles of a Rushing Midnight (Vinyl) 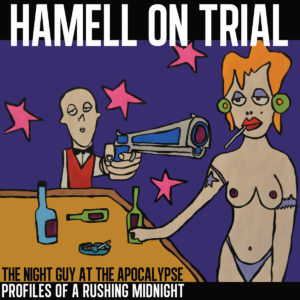 Much like Tom Waits or Nick Cave, Ed Hamell (better known as Hamell On Trial) is one of those extremely rare musicians that have somehow managed to go decades ignoring conventional wisdom and norms of the restrictive music industry, and focus purely, instinctually on churning out remarkably creative records in pursuit of entertaining vs. simply selling a shitload of records. And have confusingly been able to make a living at it.

And Hamell’s latest, the emo-worthy titled “The Night Guy at The Apocalypse: Profiles of a Rushing Midnight,” is an unfiltered example of that creativity. A bit darker than his normal fare (and that says a lot as he’s not exactly known for writing about unicorns and kittens), the record is a baker’s dozen of songs centered around sex, violence and drugs in a fictional bar, The Apocalypse. Surprisingly – and that’s the correct term when you hear the remarkable sound quality of this one on vinyl – the entire record was recorded on his cell phone, from a bathroom in an airport in Iceland to his car in a Detroit parking lot. The record’s tone is set from the start on the opening “Slap,” an aggressive ode to shutting the fuck up. The charm of Hamell on this album, as well as all of his previous releases, is how many different emotions he is able to get across in his songs with simply his gruff voice and a well-worn acoustic guitar.

Hamell is known for writing about quirky, yet oddly compelling characters, many on the fringes of society, and “the Night Guy At The Apocalypse,” is teaming with ‘em. He’s partnered with Saustex Records to put this album out as a one-off limited release on vinyl and digital only. The vinyl edition comes with a newspaper insert drink menu from The Apocalypse, hand-drawn by Hamell. The label is also offering a very limited (261 to be precise) “crime scene cleanup” clear blood-streaked vinyl. So, there’s that.

Hamell On Trial – The Night Guy at The Apocalypse: Profiles of a Rushing Midnight/Vinyl LP/Saustex Records/2018