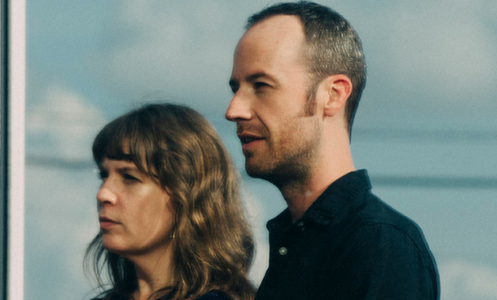 Steeped in enigmatic lyrics that could double for riddles, romantic exchanges between two equally talented vocalists and haunting harmonies between both the players and the instruments, Timber deliver a watershed album in The Family that promises to satisfy the pair’s longtime fans and newcomers alike. The most sensational quality that this record has to offer is its riveting tonality, which triumphs in the face of discordant rhythm and impossibly cerebral grooves with little hardship. Will Stewart and Janet Simpson flaunt their aesthetical chops shamelessly in these eight songs and show us why they’ve garnered the buzz that they have as an act in the last three years since their debut, and I for one think that this latest release amplifies their already unique and thrilling style to a whole new level.

The vocal duets that we encounter in “Colors” and the opener “Burying Ground” are stitched in pop harmonies that aren’t that different from what you would find in most mainstream alternative music, but are executed in a way that I honestly haven’t heard before. The tempo is almost like another one of the instruments; Stewart can shift gears on a dime in this record, but even his most aggressive moments are presented to us at a slowed down, frame-by-frame speed. This allows listeners to experience the fabric of the songs without any external filtration; it’s just us, the players and the ethereal vibrations that they’re channeling from some dimension far beyond our own.

“As a Kill,” “Downtown” and the college rocker “Shuttlecock” show off Simpson’s prowess as a singer in several different styles. “As a Kill” is probably the first Timber song I’ve heard where she overshadows the brute instrumentation accompanying her lyrics – her voice is so big and impactful, and yet still so simplistic and elusive.  “Downtown” reminds me of a noir film; instead of zeroing in on the character of the music, we’re captivated by its translation of bright and dark harmonies. As they clash and compete for our attention, our senses are filled with anticipation and excitement, wondering which side of the melody Simpson will emerge on. With “Shuttlecock,” Simpson exhibits her dexterous knack for assembling a groove out of an avant-garde rhythm which, as any musician knows, is an extremely difficult task to accomplish.

The instrumental portions of “Errant Oblivion” and “Move,” which together close out The Family, are refined beyond the requirements of contemporary pop/rock singles and don’t mind boasting their elegant style without inhibition. “Sunstroke” on the other hand is a bit more boisterous and sensuously psychedelic, even with its straightforward beat. There’s an early Pink Floyd-style progressiveness to this record, but I wouldn’t go as far as to call it a concept piece. You could cherry pick your way through this album and find that most any of the songs would stand on their own just fine, which isn’t usually the case with full blown progressive rock albums.

Listening to The Family is like looking at an abstract painting. It’s just as possible to get lost in the beautiful colors – represented here in the melodies – running into each other and creating new shades for us to contemplate and relate to as it is to become hypnotized by the vivid textures – encapsulated by the grooves – that constantly provoke new questions about the depth of the piece as we try to decipher its narrative. While all forms of art are subjective, I think that most experimental pop fans will agree with me when I say that Timber’s new album is an excellent look for the band and solidifies their status as one of the American underground’s premier acts to watch.