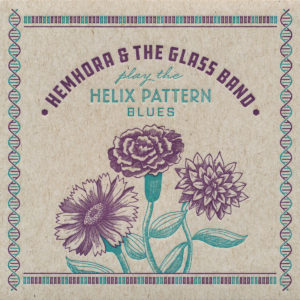 Hemhora and the Glass Band deliver an exhibition in surrealist rock for the ages in their new record Helix Pattern Blues, which is available everywhere that indie music is sold and streamed this coming December 7 through Greyday Records. Endlessly eccentric and riddled with enigmatic prose that is buried beneath a smorgasbord of colorful and unforgiving textures, Helix Pattern Blues borrows only slightly from contemporary pop construction and willfully dabbles in the sort of left-field physicality normally reserved for ambient, avant-garde and experimental rock bands alone. From the moment we press play on “The Last of Them,” the enormous melodies and suffocating rhythms are impossible to escape in this EP, no matter how deceptively minute and unthreatening the compositions may appear at first glance.

“Boxes (Vices),” “World On Its Neck” and the mathematical “BMX” are calculated and stimulating rock songs that slither and coil through a sizzling blend of sprawling harmonies penetrated with richly decadent grooves. These three songs feel like complex, intricately crafted orchestral pieces and yet play with such a smooth, iridescent swagger that they’re undebatable pop gems. “World On Its Neck” has this relaxed center that is repeatedly challenged by the psychedelic-tinged nature of its rhythm, which is volatile, druggy and unpredictably augmentative. There’s virtually nothing typical about Helix Pattern Blues, and when you consider the fact that half of its content is built on the foundation of freeform experimentation, the likes of which most of their peers would cower away from instantly, these sterling nuances become even more impressive.

One of my favorite songs from this EP is “Stage Dive,” which immediately came across to me as much more emotional than its easygoing beat lets on. The evocative timbre in the vocal is immaculately produced, but it reverberates against this tortured melody that is practically screaming out at us for some attention. Underscored by the muffled bassline and neon strands of harmony that frame the lyrics, “Stage Dive” embraces its identity with less bravado than “The Drive/The Wreck” does but nevertheless contains that same They Might Be Giants-style eruditeness that is sadly missing from the bulk of modern mainstream releases. Shades of old school DIY values can be found in all six of the songs Helix Pattern Blues contains, but there’s no doubt that this is a firmly present and relevant interpretation of alternative music.

If I were pressed to describe Hemhora and the Glass Band’s new extended play in simple terms, I would have to emphasize that while its blistering controlled chaos is of the most excessive variety in all of the pop music lexicon, records as thought provoking and musically walloping as Helix Pattern Blues is usually come around but once a decade. If this is only a taste of what’s to come out of the Glass Band’s studio work then they’ve become one of the premier groups to watch moving forward with this release, and I think their appeal won’t be ultimately limited to indie rock aficionados alone. They’ve got a ton of potential yet to be tapped into, but this is a great demonstration of what they’re capable of in a small-scale setting.