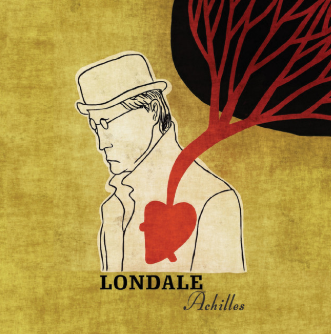 At Least Not Today is the first track on Londale’s new album Achilles. The track expertly links together 1980s pop-rock with 1990s to make something that is vibrant, catchy, and will ultimately require greater engagement by listeners to hear everything that has been placed within. The production on Achilles is solid, adding a hint of grit to effortlessly unite the guitars, vocals, and drums that issue forth.

Quit Breaking My Heart is a fun effort, tying together Chris Isaak, Tom Waits, and John Rzeznik (Goo Goo Dolls) together. Alongside with this inspired set of lyrics, Londale are able to bring to the fore a guitars / drum dynamic that is part surf rock, part intricate (and chunky) bass sound. On this single, Londale are able to put their star alongside acts like Muse, The Killers, and Death Cab for Cutie. We were taking aback that Londale was able to stretch the track to nearly the five-minute mark without any noticeable decrease in the momentum. Always able to shuck, jive, and bring an additional sound or approach into the mix, Londale is able to keep fans engaged in Achilles from the album’s first track until its last note.

Demons builds off of the framework established by acts likes Queens of the Stone Age and The Black Keys. With assertive guitar lines and non-nonsense drums, this cut may just be the high-water mark for the band on this release.

Slotted into the mid-point spot on Achilles, California builds a tremendous amount of momentum up through the song’s first minute. The soft and sedate vocals are countered through booming drum beats. The song gradually moves into something emotionally intense and tremendously deep. The twinkling guitar lines, heartbeat-esque drums, and soaring vocals combine to make something that will stick around with listeners long after the album ceases. It is during California where Londale is able to tell a wholly engrossing tale. The hope and despair are present here in equal amounts. One needs to stick around the final minute of California, as listeners will first be impacted by the touching vocals when the instrumentation drops out and then hit again by some of the most impressive playing we’ve heard in Londale’s repertoire.

Tonight has a bit of additional oomph, having Londale come in with a style that whips up Weezer and Better Than Ezra. Adding a hint of eclectic guitars and bass (think jam bands), the act is able to have a few minutes to explore a different sound. The result of this gambit is to provide a bit of a boost for listeners to have them eagerly finish the disc.


Not to Me is an effort in the vein of John Mellencamp and Bruce Springsteen. With a ton of vocals and just the smallest amount of guitars representing the track, Londale sets themselves up for establishing one of the most impactful songs that is present on their latest. With some difficult guitar lines representing the instrumental backdrop during the song’s first half, the band has ensured that listeners will be on the edges of their searts. The second half of Not to Me is full of chaos, a bit ogf all-in intensity that will bring fans out onto the pit.

Home (Rachel’s Song) switches the formula a bit from Not to Me. Where Not to Me focused much more on the lyrics while relegating the guitars to a secondary position, Home is the place where the guitars can truly shine. As Londale move to the chorus, both the instrumental and vocal sides of the act are allowed to shine.

The last segment of Achilles (Not to Me and Home (Rachel’s Song)) has the band close up shop on the release and provide a sneak peek for the paths and approaches that they will use on their next release. Make it a point to check out Londale’s domain and social media websites to keep up to date about the band and hear samples from their discography. Give the band’s new release a spin and let us know what you think about Achilles. Extra points if you can dig a bit deeper into Londale’s discography to hear the tremendous amount of evolution the band has experienced over the course of the last few years.

Top Tracks: At Least Not Today, Quit Breaking My Heart, Not to Me Home

We covered It’s A Different World back in the early part of 2018. Before that,
we looked at their LP AM/FM and delved into their Let’s Take A Ride.