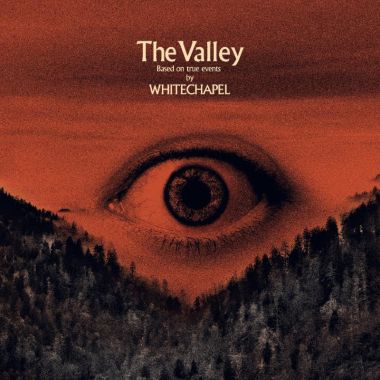 If there was ever a big 4 of Deathcore, Whitechapel would be among them, along with Job for a Cowboy, Suicide Silence, and perhaps All Shall Perish. These are the bands that invented the genre and created the foundation for what would become nearly a decade of future copycats and a mire of mediocre ripoffs. But Whitechapel are back in 2019 to show us why they truly deserve their seat among the genre elites. “The Valley” is a sharp response to all the haters out there criticizing the band and the genre of waning into obscurity.

Whitechapel has been slowly moving away from the classic breakdown-laden deathcore sound since 2011’s The New Era of Corruption, adding fresh elements to each subsequent offering. The New Era began to fully utilize extended range guitars and incorporated more elements lifted from death metal. This record was followed by 2012’s S/T record which began playing with more prog-metal ideas while still maintaining that brash exterior that fans of deathcore expect from Whitechapel. They began to veer dangerously away from traditional death metal and deathcore on 2014’s Our Endless War drawing influences from “djent” and nu-metal, much to the anguish of many of their fans, including me. Their penultimate record Mark of the Blade was poorly received and labeled Whitechapel as washed out and tired, with many fans complaining about how far they had diverged from their deathcore roots and attacked the decision to include clean-vocal passages into their songs, which many see as grievous deathcore sin.

However, The Valley is a different beast. It is new Whitechapel fully realized. The record is the culmination of the experimental elements and brave leaps taken on previous records after The New Era, but now sharpened to lethal precision. Album opener When a Demon Defiles a Witch immediately informs us that Whitechapel are masters of their craft and serves as a perfect marketing pitch for the entire record. It is emotional, explosive, brutal, catchy, and every other positive adjective you can attribute to a successful metal track. The maligned clean-vocals are back, but this time they are oh-so-good! Following that rollercoaster, we are thrown right into deathcore territory with Forgiveness is Weakness, which slaps listeners with proof that Whitechapel can still write crushingly devastating riffs, breakdowns, growls, and blast-beats. I found myself screaming “Forgiveness… is useless!” to the air after two listens, instantly fast-tracking the track to my favorites. Every track on The Valley is set in purpose, with zero fluff. Tracks like Brimstone, Black Bear, We Are One are blistering deathcore tracks that will be perfect additions to their live repertoire.

Even when Whitechapel decides to ease up on the brutality with acoustic sections and melodic arrangements they do so with the maturity of veterans. It never comes off as contrived or insincere, and instantly connects with the listener. A prime example of this is the emotionally-charged Hickory Creek. Any deathcore fan, including myself, would have balked at the idea of a Whitechapel track filled entirely with clean-vocals, but Hickory Creek is easily among the heaviest tracks Whitechapel has ever written, not in the traditional sense, but with the amount of sincere weight it carries. There is not a weak or forgettable track on this record, which is high praise for a genre that is pretty played out in 2019. Album closer Doom Woods is apt, it is an epilogue to an immensely enjoyable journey through the ten tracks of ferocity, anger, strength, vulnerability, and depth. Doom Woods is a mid-paced lumbering beast with gigantic chords backed with ominous string arrangements perfectly closing the record on a somber note.

The Valley shows that Whitechapel can write superlative and cohesive deathcore, because at its core the members of Whitechapel are constantly innovating. The guitar riffs are sharp, the breakdowns chunky, the solos soaring. Even though Whitechapel will always be criticized for underusing their three guitarists, The Valley does show each of the guitarist’s flair at various points through the record. The bass is well-mixed, and slices right through the mix, which is a tall order for a band with three extended range guitarists. It growls during the riffs, and is smooth during the slower sections and is altogether rewarding. Drum duties on The Valley were handled by Navene Koperweis (ex-Animosity, ex-Faceless, ex-Animals as Leaders, Entheos) who is no stranger to writing bludgeoning drum sections and his heavy hits go a long way to make The Valley as brutal as it is.

But nobody will deny that the true star on The Valley is vocalist Phil Bozeman, and oh god, he is absolutely godlike on this record. His lows are hellish, his shrieks are banshee-like, and his cleans are easily among the best in metal, period. He channels Deftones, Slipknot/Stone Sour, and Alice in Chains with his clean-vocal stylings with masterful proficiency cementing his place as the best vocalist in the genre. Where Suicide Silence failed catastrophically with their attempt at clean vocals, Whitechapel (and Phil) clears any doubt that clean vocals can be pristine in the genre when done right. Furthermore, the lyrical content is directly influenced by Bozeman’s own childhood struggles and difficult relationship with his addicted and abusive mother. Tracks like When a Demon Defiles a Witch, and Hickory Creek even have lyrics directly taken from his mother’s diary which adds a level of gravitas that is unparalleled. Another example is when Third Depth grinds to a halt and Phil moans “Im not stable” you feel every breath of angst in his voice. Even with a few moments spent with these tracks are enough to convey that these songs are near to Bozeman’s heart and by extension, Whitechapel. This is surely his strongest effort to date and will be difficult if not impossible to beat on subsequent records.

Whitechapel has not sold out, in fact, they are back with a vengeance, and have made a bold proclamation with The Valley. They are here to stay, they are the band to beat in the genre, and anyone who skips this record is doing themselves the greatest disservice!