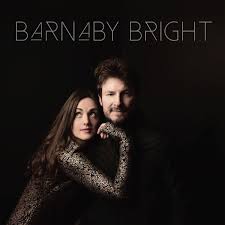 Sometimes it takes the subtleness of a folk song to really hammer home a point. On the lead off track (“This is Life”) to their self-titled new album, the Kansas City duo Barnaby Bright deftly cover the struggles war vets face after coming home. The track leads off with sound clips from George W. Bush and Trump saber rattling, a sound collage that wouldn’t sound unusual as the intro to an anti-war punk song, but the band’s beautiful folk pop that follows does a remarkable job of conveying the message.

The song also serves as a promise of what’s to follow, as the band – comprised of husband/wife Nathan and Becky Bliss – reel through 10 solid, satisfying tracks that always put the vocals at the forefront, blending folk and pop music. But what separates Barnaby Bright from the traditional acoustic guitar and stool folk set is their willingness to experiment with different sounds, like the infectious “This is who I am” chorus running throughout “Who I Am.” Elsewhere, they still borrow some of the reliable staples from folk music, like the sweet melodies and the blending of duo vocals, for a traditional spin on their otherwise updated sound.

There are a couple of slower, less inspired tracks here and there that seem to drag the record down a bit, but those moments are few and far between. By leaning back on some of the reliable conventions while still firmly looking ahead and willing to branch out, Barnaby Bright have managed to pull out an original album that sounds both comfortingly traditional and groundbreaking at the same time.