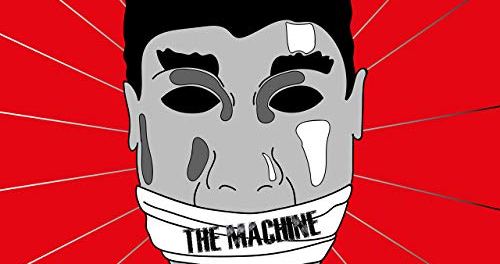 It isn’t often that a synthesizer dishes out the sort of endearing melodicism that we normally associate almost exclusively with string instruments in western pop music, but that’s exactly what audiences can expect to discover in the charming “Darling Anna,” from 2.O.F.’s The Machine EP. Through their boisterous and evocative harmonization with the lead vocal, we get a mood to match the story that the lyrics are telling us, with the end result bringing artist and listener closer together than most pop music would. “Darling Anna” is a breath of fresh air in an otherwise dismal and depressing summer for indie pop in the UK, and while it’s a sterling single by any critical measurement, it’s not the only gem to behold on The Machine.

As strong as the instrumental grooves are in this track, I think of “Darling Anna” as being a major vocal showcase for 2.O.F.’s debut record. Everything is built on the foundation of the lyrical structure; the arrangement of the percussion draws us into the surreal verses while the bassline holds us in a consistent rhythm, making it sound as though the synthesizers and the vocal are moving at two completely different tempos. The confliction only adds to the swaggering energy of the chorus, and by the time that we hit the halfway point in the song, every component is working in such synchronicity that it feels like the track is a solid, singular entity rather than multiple parts carefully layered on top of one another.

One thing that struck me as curious in my initial listening session with “Darling Anna” was the bassline’s somewhat muted contribution to the backend of this single. Unlike the majority of summer tracks that have been ascending the Billboard charts this July, this song doesn’t sport the sort of grandiose, bloated bass elements that shake your floorboard even when played at moderate volumes. “Darling Anna” is conservative on this front; where some would have introduced a lot of excess on the low-end (particularly in a song that has as much crossover appeal with electronica buffs as this one does), 2.O.F. lays out a slinky vocal harmony that ties everything together neatly and without any unneeded fluff.

Club fiends and pop music aficionados alike should make a point to check out what 2.O.F., the brainchild of Tim Milliken, has cooked up for fans in The Machine and “Darling Anna,” as both are sparking some legitimate accolades this season. I wasn’t sure what to expect when I came into this review, but I certainly didn’t anticipate on hearing the cerebral textures and postmodern harmonies that make up this track’s inner core. Milliken absolutely hits it out of the park in his debut under the 2.O.F. moniker, and with any luck, it won’t be too long before he reconvenes in the studio for a complete LP of this music. There’s still time for this sound to come into its own a little more than it already is before the 2020s roll around, and I for one am excited to hear the next batch of experimental results sooner than later.

The music of 2.O.F. has been heard all over the world due to the promotional services offered by Danie Cortese Entertainment & Publicity. Learn more here – http://www.daniecorteseent.com/