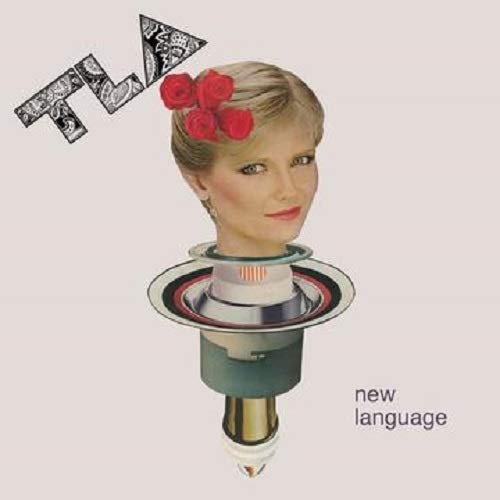 The five-song EP release New Language from the band TLA is a meeting of the minds with long term potential. TLA has a core of Jon Sortland from The Shins, The Pleased’s Jason Clark, and paper cut artist Tahiti Pehrson and their songwriting talents come together in a tight wound guitar-driven pop confection held together by sharp musicianship and superior songwriting. The material has to the point punch that makes this a winning collection and the founding trip augments the performances with contributions from guests such as The Pleased’s Genaro Vergoglini and Miguel Aldana. The musicians never belabored these cuts; they have off the cuff spontaneity gives each one an added splash of sparkle.

“New Language”, the EP’s title track, begins the release with a definitive statement. It is a track certainly recalling the glory days of British New Wave and similar fare emerging from continental Europe during the early-mid 1980’s, but this style in the hands of TLA takes on added weight. Their wise refusal to mimic any particular artist and the light ominous spirit pervading the recording separates it from ever resembling mere imitation. New Language boasts production that, despite the indie nature of this recording, sounds as polished as anything you would expect to hear from a well-funded major label act; the reverb colored guitar has icy confidence sustaining the entire performance.

The second track “Look / Cocklieb’s Journey” slows the tempo and jettisons the strident tone of the opener. Vocals are a striking part of the band’s presentation and the contrast between the lead and backing vocals, the former more declamatory while the backing vocals hit a pleading note, imbues the performance with much of its melancholic soul. The last quarter of the track, “Cocklieb’s Journey”, is a swelling and inspired instrumental with a much happier hue. “Mindbomb” has a much rougher texture than the EP’s first two tracks but continues embracing a languid tempo rather than revisiting the pace of “New Language”. Synthesizers play a much more prominent role in this performance as well.

“Midnight Moan” dispenses with any notions of pleasantries or pretense, puts its head, and bulldozes us instead with a blast of proto-punk taking no prisoners. The track might feel like a throwaway to some, clocking in under a minute in length, but has a surprisingly positive effect on the EP’s listening experience and provides a needed change of mood. The conclusion “Forty Years” includes captivating rhythms and counter-rhythms the guitar work weaves tense phrases around and the vocals have the same emotional, off-the-cuff resonance we’ve heard throughout the release.

TLA’s New Language may not be re-inventing the musical wheel, but it is a fresh and invigorating musical statement that gives this band an instant identity they can build off with future releases. The long experience of those involved with the songwriting and playing on this EP pays off with one of the year’s more surprising under the radar collections of 2019. As happy accidents go, this rates among the happiest you will encounter.