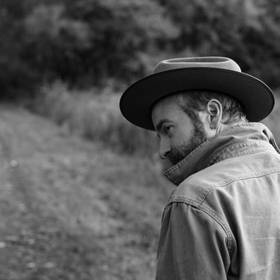 Gone are the fiddles, the mandolins and the banjo, that have come to define Trampled By Turtles trademark sound, but Dave Simonett’s strong stark vocals are still front and center on this, his first proper solo album under his own name. The music is a mix of mostly somber Americana and folk and is in the same vein as the material Simonett put out under the Dead Man Winter name.

The eight-track Red Tail uses it’s more stripped down sound to accentuate Simonett’s near poetic lyrics, a feature the occasionally gets lost in the fun frantic pace of Trampled By Turtles music. The first couple of songs are solid, but Simonett’s really lets the lyrics shine four tracks in, on the stunning “By the Light of the Moon” and shortly after on “It Comes and Goes”. And despite the often somber delivery on most of the tracks here, the songs are a lot more optimistic than his music under the Dead Man Winter moniker. The record ends with the singalong jam “There’s a Lifeline Deep in the Night Sky,” with its unvarnished playful intro and outro, segue into the best song on the album.

Simonett may be a bit more subdued on this solo outing, but that doesn’t mean he’s lost any of the charm; his songs are just given a little more space with this outing.