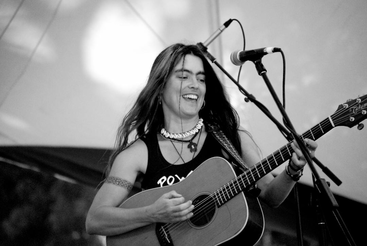 “Somewhere There’s a Song Still Singing” reminds us in 2020 that traditional folk music still holds the power to leave listeners spellbound. It helps that Diane Patterson never treats the form too reverentially, like a butterfly trapped under glass, but instead injects her compositional skills with a level of melodic excellence certain to connect with both casual music fans and folk devotees. She has built a wide ranging discography over the course of over a quarter century and a die hard following thanks to innumerable appearances on the festival circuit, house shows, theaters, wineries, and parks. She has worked and played with top shelf talents like Ani Difranco, a sign of the respect she commands from her peers, and her commitment to providing listeners with a top flight musical experience is obvious in everything she does.

The three aspects of her music displayed in this song, vocals, guitar, and lyrics, are equal. There’s never any feeling that one element of the song has prominence over the others; Patterson has devoted her energies to crafting a well-rounded artistic piece where each part works in concert, rather than opposition, with each other to form a greater whole/. Her skill as a guitar player gives the song an unwavering musical foundation and it has touching eloquence born from her talents and considerable experience. In some ways, the guitar work acts as a second vocalist and plays off against Patterson’s voice with splendid results.

The vocal melody and phrasing bring her already exceptional lyrics to even greater life. Patterson gives every ounce of herself over to giving the song’s message an emotional center through the sound of her voice and she explores her range with the kind of confidence only veteran musical artists can call upon. Her high points in the vocal performance are particularly affecting and scale crystalline peaks few other singers can reach. It is invigorating and inspiring to hear the beauty of her voice in full flight.

Her singing has a sure-handed touch as well. She has utter confidence in her ability to inhabit the words with a spirit of respect and reverence for the subject, the relationship between people, the land, and music, and the lyrical content portrays the relationship as one that crosses all manmade and philosophical/religious belief. It has enormous, but yet understated, ambition and every line of the track makes it quite clear she has more than enough talent to make it work.

Diane Patterson has traveled many miles and undoubtedly lived several lifetimes since first emerging as a musician in the early 1990’s. You get the feeling listening to this track Patterson would never stop writing and playing music even if her recording career ended tomorrow, but let us be grateful she still harbors such an intense desire to share her gifts with listeners worldwide. “Somewhere There’s a Song Still Singing” connects with the larger implications of music in our lives and makes a compelling case for its transformative effects on the trajectory of human lives.