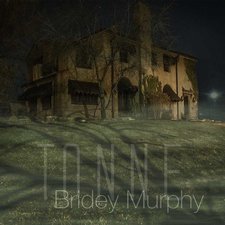 Opening in a haze of new wave-reminiscent bass and drum surrealism, “The Great Game” doesn’t waste a second in wrapping its haunting hook around us beyond the point of escape, and not dissimilar to the other three songs it shares a tracklist with in the new record Bridey Murphy from Tonne, its flirtatiousness with alternative rock song structuring isn’t limited to cosmetic frills alone. In Bridey Murphy, noisy melodies and punkish lyrical themes make merry with conventional pop aesthetics in the tradition of R.E.M. and Sugar, and in the eye of the storm we find one Jay Tonne, whose tempered voice ties together all of the loose ends in this EP like nothing else could have. This is alternative music for a new generation of discriminating ears, and it’s arriving at the perfect moment this spring.

Right out of the gate, I felt like Bridey Murphy is a lot more unrefined than Tonne’s record with Black Forest Fire, Transit of Venus, was by leaps and bounds, but this isn’t to say that anything sounds or feels thrown together here. A big part of the charm in songs like “Catalina,” “The Great Game,” “Jesus, Julie Christie!” and “Perfect Dream” is that none of the substance behind their individual melodies has been augmented by some ridiculously synthetic studio element; there are no bells and whistles for us to get past in this tracklist, but instead only sheer, unvarnished metallic components flanked with heart-throbbing harmonies as accessible as they are chill-inducing in most every instance.

“Perfect Dream” and “Jesus, Julie Christie!” are driven more by aesthetical contradictions than the other two songs on this disc are, but from where I sit, it is within their contrast that we can come to understand just how much Jay Tonne has to give as an artist. His experimentation in this EP is legitimately inspiring, and although its roots can be traced to an alternative movement that started decades ago (and mostly far from the mountainous terrain of Colorado, his home state), the sonic campaign he’s engaging in here needed a shot of life – by all critical standards – this year. I hope this isn’t the only occasion he cuts loose in the studio, because I believe he’s onto something really special with Bridey Murphy.

Tonne definitely has my attention moving forward from Bridey Murphy, and if you enjoy provocative alternative rock as much as I do, he’s going to have yours as well (once you’ve heard this stunning extended play, that is). Breaking off from a well-known creative project, especially those based in Austin, Texas, can be a challenge for any artist to undertake – regardless of their talent level – but for Jay Tonne, he’s making the transition all too simply in this first release under his own name, and if this is just a taste of what we can expect to hear from him in the future, I think he’s going to be in for quite the long and happy career away from Black Forest Fire indeed.