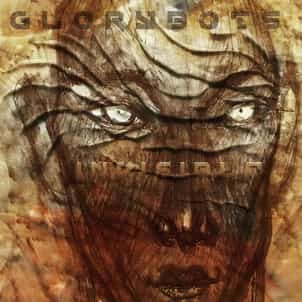 Though guitars are frequently a centerpiece in any given rock album, they take on a special role in the songs found on Glorybots’ new LP Invisible that shapes not only the tone of the music, but the very lens through which we interpret it. In songs like the record-opening “Blepharospasm” and swinging “Radiate,” the riffs serve as a direct extension of the lead vocal in expressing the complete depth of emotion behind the lyrics. There’s no end to what their textures can impart to us in these eleven new songs, and even in cursory listening sessions, it’s hard to walk away from Invisible’s 40-minute running time unaffected.

Despite the noise rock in Jalal Andre’s background, he’s offering some startlingly simple melodies for our enjoyment in “London Breeze” and the fluttery “Far Away” that balances out some of the more abrasive content here exquisitely well. There’s diversity to the material in this tracklist that is something to marvel at all by itself, but beyond the surface-level value that an LP as well-appointed as Invisible is lies a compositional integrity becoming all too difficult to find in mainstream rock anymore. Glorybots is deep underground in more ways than one when considering the project’s sound from this perspective, and that’s both a good and bad thing for the scene that spawned Andre’s career.

The lead vocal is actually pretty surreal in the otherwise angst-ridden “Me vs You” and psych-tinged “Repent,” and the emphasis on the verses is actually something I didn’t think I would find in this sophomore offering from Glorybots. Dark Alien Pop, the project’s debut album, was all about celebrating instrumental prowess, and while there’s still quite a bit of muscle flexing in Invisible, there’s no getting around the fact that this is a much more accessible offering in terms of structural familiarity.

I’d really like to hear “Caged and Confused,” “Cumulous,” “Wrong” and “Loaded Gun” live sometime, mostly just to appreciate the versatility of their arrangements in all of their uncut glory. The way they were recorded and produced in this setting leaves me wondering just how much on-stage experimentation they could be subjected to in concert, and with any luck, Glorybots will have the chance to hit the live circuit again a lot sooner than later. Invisible has the bones to be a crowd pleaser – its melodic multidimensionality alone confirms as much for the typical alternative rock audience.

Seattle’s music scene has been seriously lacking in anything exciting or noteworthy in recent years to say the least, but if you ask me, Glorybots is salvaging the city’s reputation with a fierceness that indie rock desperately needed in 2020. Invisible is an unapologetic juggernaut, and for all that it gives up in commercial varnish it more than compensates for in pure adrenaline and moxie – the latter of which has become somewhat of a diamond in the rough for this genre lately. Jalal Andre is onto something special here, and I think most rockers will agree with me on that after hearing his new LP for themselves.