Origins – Vocalists And The Songs That Made Me by Jeff Coffey 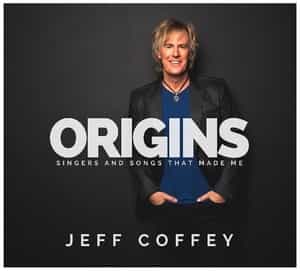 If I had a voice like Jeff Coffey’s, I would be singing some of music’s biggest hits, too. Origins – Vocalists And The Songs That Made Me, Coffey’s album is a bevy of rock music and some pop rock songs that steal the moment. A former lead singer of legendary band, Chicago, Coffey makes these cover songs his own in a 14-track odyssey. As each track unfolds, the listener gets a deeper appreciation for these epic songs and for Coffey’s coffers.

Born and raised in Florida, Coffey’s musical tastes were basted mostly in jazz during his college years at University of Central Florida. His first professional gig, a member of the band House of Dreams, a rock band. While the band recorded an album, the record company never released it and dropped House of Dreams. Fast forward a few years and Coffey’s bass guitar skills led him to playing for former Bad Company singer, Brian Howe. From 2016 – 2019, Coffey sang lead and performed bass for Chicago. Today, he is touring bassist for Don Felder, former Eagles guitarist.

One thing that captures the listener’s attention the most in Origins, is Coffey’s enthusiasm. His voice has an instant rapport. The relationship between his live performances and studio work is seamless – all of the songs on this album feel as though they ignite from the same space. The more arena rock tunes – like “Ask The Lonely” (originally recorded by Journey in 1983), “Waiting For A Girl Like You” (originally recorded by Foreigner in 1981) and “Who Wants To Live Forever” (originally recorded by Queen in 1986) come alive. The backing music is all perfectly matching.

His version of “It’s Only Love” features Payton Taylor. Much like the Bryan Adams original, instead of Tina Turner or the smoky vocals of Melissa Etheridge, Taylor adds a textured dynamic to Coffey’s tenor. When their voices blend on the lines you can live without the aggravation / you gotta wanna win you gotta wanna win / you keep lookin’ back in desperation / over and over and over again, their voices light up like diamonds hovering above the sweltering, melodic guitar riffs. I must say, even though it’s not on the record, a Coffey version of “Cuts Like A Knife” or “(Everything I Do) I Do It For You” would be equally stunning. Like Adams, Coffey seems to be cut from the same cloth of timbre.