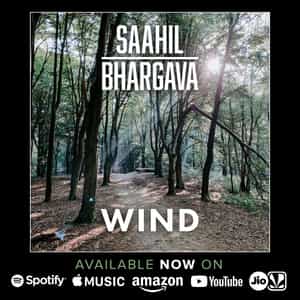 Saahil Bhargava’s Wind is an inspirational track that will immediately draw listeners in with compelling keys. After a few seconds, the single is able to incorporate Saahil’s vocals. Bhargava’s voice build upon the rich tradition of late-1990s alt rock and early-oughts emo music. This means that Saahil’s vox are simultaneously able to tell a rich and varied story all while contributing mightily to the overall harmonies achieved to the track. Wind is an effort that ends up sounding tremendously coherent as a result. Listeners will fall in love with Bhargava’s latest as the track itself is able to bring in numerous styles and approaches all while pulsing with the performer’s unique take on things.

Wind’s production is able to ensure that the track is able to garner considerable plays in lists and radio rotation rolls, all while having an honest and earnest aura that envelops it. Bhargava’s video is able to marry together the highs and lows of the effort with the sheer beauty of nature. The decision to set the video in nature perfectly accentuates the message that Saahil weaves through the composition. While Saahil was able to showcase considerable musical chops with his cover of Muse’s Plug in Baby earlier this year, this homespun track will undoubtedly provide fans with volumes of information about Bhargava when coupled with the multimedia aspects of Wind.

We’re hoping to hear more from Bhargava in the months and years to come; Wind will remain on heavy rotation here at NeuFutur through the beginning of the new year. Saahil’s new EP tentatively has a release date sometime in 2021. Add his social media profiles for the latest in information about this release and for the inside track on any future developments. Leave us a comment and tell us what you think about “Wind”.