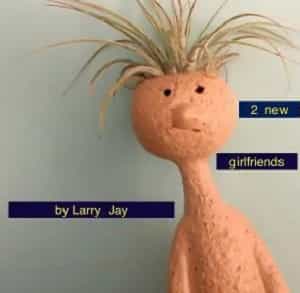 The refined purveyor of truth, Larry J, is back on the scene with two new singles. After recently undergoing a successful bypass, Larry has managed to write and record two quality Pop Country songs. His reputation precedes him, with a grocery list of achievements, collaborations, and accolades. He likes to keep it simple, when it comes to his music, so don’t expect any pretensions or obfuscations. Larry J delivers from the heart, to the heart.

First, we have “2 New Girlfriends.” Well, actually, Larry has 2 new girlfriends….kind of. These lovely gals come with a surgeon general’s warning label, and should not be consumed while operating any heavy machinery. Bloody Mary is LJ’s morning boo, and Margarita, his lady of the night. Larry lets us all in on the joke, early in the song, and continues to ponder on his delightful conundrum.

He caustically tells us of their plans for a “menage a trois,” later in the evening, while trolling himself in the process. It’s divine Country fodder, of course, and Larry’s charisma makes it fun, even though the story feels slightly rehashed. Larry tends to put his vocal, front and center, because that’s the nucleus of his act. The music is relatively rudimentary, but it captures the setting, successfully. It’s a little busy and pitchy at times, but it doesn’t take away from the enjoyment of the piece.

Next up, we have “Chasin Me,” which is something of a contrast to “2 New Girlfriends,” musically. However, both are essentially, love songs with a bit of a twist. “Chasin Me” is from the point of view of a man, who wishes he were on the other side of the courtship protocol, for once. Where this piece differs from “2 New Girlfriends” is that it is a bonafide ballad. With beautiful arrangements, and a pristine guitar tone, “Chasin Me” is a gorgeous listening experience.

I Wish love could be as easy/as reality TV/So I could be the bachelor with a rose/and she’d be chasin me. This section of the chorus is the key lyric to the song. We see preposterous depictions of dating on television and become conditioned to believe that it somehow mirrors actuality. Now of course, Larry J was unlikely coming from a literal space, but it’s telling and clever, that he chose such a metaphor. Some might detect a certain narcissism or chauvinism, on “Chasin Me,” but it’s truly a sweet and thoughtful performance.

Larry J has staged an inspiring and admirable comeback. He has obviously maintained his sense of humor, throughout his ordeal, and remained, creatively motivated. His music is refreshingly unpretentious and he plays for his crowd. In an industry that is often rife with excessive ambition, there is something to be learned from modesty. Because as they say, the chase is often sweeter than the catch.