Singer/Songwriter Rob Alexander is back with Dream Out Loud LP 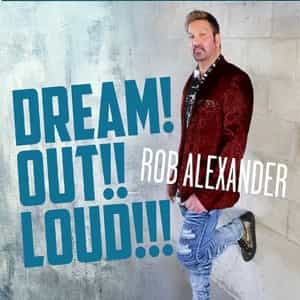 From an instrumental point of view, there’s no argument that Rob Alexander isn’t trying to reinvent the wheel in his new album Dream Out Loud; however, there’s also no denying that while he isn’t trying to break new ground in the pop/rock genre, he’s definitely stepping up his game as a soloist in a bold new era for the style. We’re given the chance to hear what Alexander can do at his funkiest and his most freeing in tracks like “Instant Sex,” “Kings and Queens,” “Angel and Johnny” and the rousing opener “Yesterday’s News” in Dream Out Loud, without ever having to submit to a blueprint clearly produced by some other artist outside of the recording studio. This is a passion project that is defined by its accessibility, and contemporarily speaking, it’s an example of what positive creative insularity can yield when you’re utilizing the best elements of your talent to make original new material. I’ve had my eye on this player for a couple of years, but little did I know that he was planning on laying down his finest material at this stage of the game.

As far away as the club scene has felt in the past year, Rob Alexander still finds a way to bring us the energy of the dancefloor inside of songs like the title track, “Hot Potato” and “La Flambeau.” He successfully tries to cover as much ground as he can within the spectrum of his lyrics, but I appreciate his unwillingness to stretch himself so thin that his mightier verses lose their integrity. The emotion in “Olivia,” “Love Will Find You” or “Look Out Below” is being produced through the confluence of the beat and the vocal, with the hook bringing them together in a marriage fit for descendants of royalty.

There isn’t a single arrangement in this tracklist that I would go ahead and deem too grand for what the rest of the material has to offer us; instead, I think this is one of the best demonstrations of indulgence being put to good use in 2021 thus far. It has me reconsidering the depth of this artist’s songwriting skill and, perhaps even more importantly, his legitimate capacities as an in-demand player outside of his own domestic circuit.

Rob Alexander has been getting better and better with each release he stamps his name on, and in this sense Dream Out Loud is no different than the albums to have come before it. What separates this LP from the pack is its flexibility and overwhelming sense of untethered romance; while it shows off an Alexander more in love with the music than he’s ever been in the past, he isn’t decidedly committed to putting his heart into one style of play over another. He’s playing the field from inside of the studio, and despite the difficulties in doing this with any degree of articulate cohesion (regardless of the genre in question), he still makes it look and sound all too easy here.