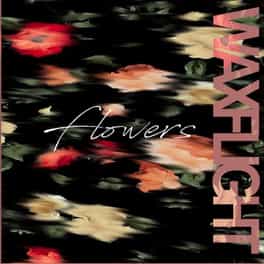 Utilizing a jagged groove to emphasize the simplicity of their melodies in “Daughters of Progress.” Drawing together otherwise perplexing pulsations out of the ethers to form a casual rhythm in “New Dogs.” Dabbling in the best sort of overindulgence you can hope to find in a guitar-driven album in “Myth of You.” Slapping us around with the very audacity of a signature harmony in “Equation.” Waxflight mean business in their new album Flowers, and whether they’re binding raw emotion with refined melodicism or simply playing to the standards of a general that is head-over-heels in love with hybridity, they sound like a band on top of their game in every track here. Flowers is comprised of the distant post-punk charms of songs like “Sancte Michael,” affirming statements of both self and society in the likes of “Chemicals” and bruising musical poetry ala “Kissing a Stranger,” each one of its songs seemingly more elaborate in nature than the one to come before it. Whether enjoyed on shuffle or from “Fall into Life” to “This Street,” Waxflight’s new album is one that I encourage you to hear uninterrupted – mostly just to bask in the glow of its numerous intricacies.

There isn’t a lot of brawn to “Ny-Lon,” but this doesn’t stop the track from swinging a sweet groove with as much moxie behind the beat as one would hear in “Kissing a Stranger” or “New Dogs.” The vocals are especially fragile in a few spots, such as “Equation” and “Daughters of Progress,” but never without purpose. One of the worst elements of the new indie rock I’ve been listening to in the last couple of months has been the abandonment of introspection in favor of purely commentarial lyricism, but this is never the case in Flowers. Between the aforementioned fragility of the vocal and the crunch of the guitars, there’s no escaping the vibe that surrounds every verse in this LP, but even if they had been presented in an isolated setting I still believe the poetry here would be noticeably stronger than the status quo. Rebelliousness comes in many forms, and here it’s offered through a desire to be different that Waxflight refuses to compromise.

I hadn’t heard about this band before coming across this record, but judging from the ambitiousness of the Flowers tracklist I would be foolish to leave them off of my radar in the future. Waxflight are following a familiarly surreal path that syncs up well with what a lot of their rivals in the American, Canadian and British undergrounds have been exploring in the last half-decade or so, but they’re going about their use of the postmodern aesthetic in a most unique way. There’s still some room to develop some elements of their sound, but even with a couple of surface-level cosmetic changes to be considered, there’s no need for debate as to whether or not Waxflight are ready for the primetime stage. They prove they are in Flowers, and that’s evident inside of the record’s first four songs.