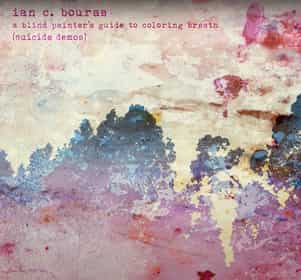 Ian Bouras’ A Blind Painter’s Guide to Coloring Breath is one of the young year’s most interesting releases yet for a number of reasons. The eight songs on this release are demos; circumstances dictated the nature of this release. Bouras, under optimal circumstances, would have polished and further developed these tracks, but Bouras spent the bulk of 2020 as a patient in various psychiatric hospitals. Bouras experienced considerable difficulties reacquainting himself with the guitar and opted for releasing the project in its current state.

Another reason for interest is his compositional approach. A Blind Painter’s Guide to Coloring Breath hinges on Bouras’ penchant for effects-driven guitar playing utilizing looping technology for building musical arrangements. There’s no one else quite like him on the scene today – and that’s an uniformly good thing. “A Fleeting Life in a Square” will jolt the uninitiated. Bouras never rushes anything, relies on the aforementioned looping, along with other guitar effects. There’s a definite progressive personality in this track and its predecessors.

“Perspectives” underlines that aspect of Bouras’ music. It rates as one of the album’s most creative musical moments and its cockeyed off-balance movements in the arrangement set it apart from other tracks on A Blind Painter’s Guide to Coloring Breath. It’s a welcome break in the collection. “The Darkness that Clothed an Angel” is another memorable moment. Bouras dives deeper within over the course of this song; it’s obvious his emotional investment in this song is somehow different than other tracks. It runs a hair over nine minutes, but the next track is much shorter.

“The Necessity of Continual Movement”, based on its title alone, seems to advocate the need for moving into the future. Stasis leads to decay and the exploratory reach of Bouras’ music is ideal for embodying such ideas. It doesn’t clear the five minute mark and the condensed structuring of this track compared to others is another unexpected and welcome turn during this release. “Words Become Months, and Memories Become Melodies” is an emphatic finale without ever musically overstating its case. The track listing for A Blind Painter’s Guide to Coloring Breath plays a crucial role in its success. There is a potent mix of the slightly off-center alongside the customary and impressive production values despite the demo origins of the recordings.

Ian Bouras’ long-term battle with Ataxia has stopped him from following his muse and it is easy to believe Bouras, despite his recent medical struggles, will soon return. Nothing has yet extinguished his creativity and faith he will continue writing and recording his distinctive instrumentals isn’t difficult to maintain. A Blind Painter’s Guide to Coloring Breath has a completeness few fully-finished releases achieve and evidence of searching creativity no illness can ever quell. Circumstances pushed Bouras to discover his own melodic language and the emotive power of his playing is unquestionable. It isn’t music everyone will fall behind. A Blind Painter’s Guide to Coloring Breath asks listeners will tune into his particular wavelength and pay attention. It isn’t a throwaway pop confection. It’s musical art.