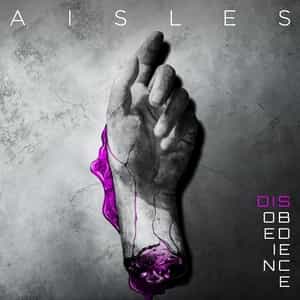 There’s something to be said for a song’s ability to craft full words out of a certain level of ambiguity in its settings. Maybe I’ve been playing a little too much Cyberpunk 2077, but Aisles feels right at home in the dystopian genre. The opening guitar solo has the energy of a door being busted open, either by a swat team or by the collective that Aisles seemingly feels like with its multiple performers at the helm.

Look, there’s no way of sugar-coating it, we’re living in a “post”-pandemic world, and the unrest we’ve all felt for the past year (and in some cases 4 years) has created a strong division amongst people. Aisles know this and taps directly into the cultural pules with lines like “You just obey cos’ someone carefully thought it out/fuck, breed, raise, pray, share, vote, work, pay, and choose your coffin now”. Yeah, it’s a real upper of a song. This isn’t to say it’s naval-gazing in a juvenile mindset, far from it. It’s a sonic achievement from a group that’s only gotten better with time. From the opening banger, which transitions into a calmer pseudo-techno rhythm to the ending that effectively uses echoes to simulate the end of all things, the creative decisions made by the group feel so deliberate and painstaking.

As the kids would say, for a song this angry and provocative, it’s a “vibe”. It’s a strong mood piece that would honestly fit at home in the Matrix-era 2000s, but it doesn’t sound like a vintage callback. It’s a revolutionary war song for the people (especially the youth), who feel an undying restlessness. As though they’ve been promised something that’s never really existed, to begin with. Lines like “I won’t listen I don’t care for cults or idols” are the exact kind of condemnation of celebrity and influencer culture I think the world needs right now.

The aggressive guitar and wildly kinetic drums capture that sort of manic energy of a harsh night of tragic realizations. Love is a strong undertone throughout the song as well, starting off as lustful almost “edge-lord” material, that eventually opens its heart to a sensitivity that genuinely surprised me. Most of that is thanks to the wildly impressive vocals of Israel Gil who helps imbue the song with a soul to match that aggressive beating heart that the percussion provides. No good song is too long, and no bad song is short enough and somehow Disobedience for its epic length of 7 minutes, calls to mind the bloated and deliberately exhausting work of 80s punk. It’s a track that wants to wear you out if only so the message stays clear in your head right after it’s over. I won’t lie, this track kicked my ass, but in a good way. The bands’ fifth studio album drops this year, and if this is any indication we’re in store for a real treat. Anger is only indicative of passion and Aisles has that for days.