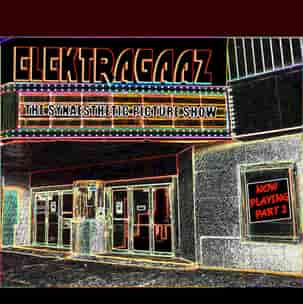 If you’re someone with a novice level of experiencing electronic music, Elektragaaz and its new EP The Synaesthetic Picture Show Now Playing, Pt 2 is a perfect jumping-on point to see what the genre truly has to offer. Less the aggressive sounds of say Skrillex and more akin to the sounds of IDM (Intelligent Dance Music), it’s a style that’s made more for home listening than it is as a club banger.

That’s not necessarily a bad thing as it allows you to ingest the music in a raw focused way. It’s “a vibe” as the kids say. It’s music made to sweep you away in the recesses of your mind, allowing you to craft whatever narrative or attach it to whatever emotion you want. That might be a little off-putting to some who want something a little “easier” in their listening, but I promise if you really relinquish yourself to this fantastic EP, you’ll be highly rewarded with a true one of a kind experience. It’s a brisk but surprising full listen clocking in at slightly under half an hour with some tracks being on admittedly, the long side.

This is par for the course with this style of electronica, but if you’re not really in it, it might seem repetitive. The repetition to me is part of the charm as the fantastic production lets you really take in every instrumental flourish and the mastering on it is better than numerous albums I’ve listened to this year from even big-name acts. The songs also keep you on your feet as seen with the intro track that starts off as an inviting and textured funk bop that sounds like something you’d hear in an 80s pastiche flick that we’ve seen a large rise of in the last year. There’s a lot of cues from various artists and even the start calls to mind the film work of DEVO frontman Mark Mothersbaugh and his score for the trippy Thor: Ragnarok. The track even pivots with a violin solo that catches you off guard but is so sharply focused and incorporated stunningly. You don’t need to have listened to part one of the EP releases, it has come out in February, but it helps and I’m curious why the release wasn’t made as one full album, but then again it might have run on the long side and been a bit more exhausting. Elektragaaz has a pure appreciation for various genres and isn’t afraid to wear their love for them on their sleeve. It’s not quite world-music, but more of a memory of world music in this neon psychedelia.

My hope is that for many listening to this, it’ll make others want to expand their horizon on countless genres and genre mash-ups that are being experimented with here. It’s a full work of art that will most likely rank among my favorite works this year with its killer hooks and memorable and unexpected rhythms. You can stream the album now on Spotify.