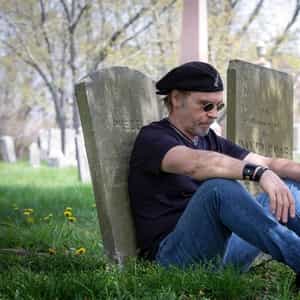 Introspective songcraft rose in value last year, as the insularities of 2020 forced a collective look inwards for the first time in generations, and it’s in this spirit that Paul Rocha’s Apophenia feels like a truly iconic offering. In Apophenia’s ten songs, Rocha navigates narratives that feel like internal thoughts only realized when left alone with ourselves to rhapsodize and recall memories and visions once abandoned in youth. “Sister Silhouette,” “The Other Side,” and “They’re All Dead” are entries in a diary not necessarily complete but open to for reexamining, and from where I sit, they comprise one of the smarter indie records you can get your hands on this month.

Retro elements find their way into the mix of “Sweet Marianne,” “Under the Influence,” “The Day That I Fall Down,” and “Speaking of Ella” in particular, but only as a means of reinforcing the reflective vibe we start with in “The Other Side.” Throwbacks have their place when they’re conveying kinship with the old guard, but to tether your sound to something hypnotically not of the contemporary without coming off as a hack takes next-level talent – the sort of which Rocha appears to possess in spades.

Though he’s never been known for an aggressive style in previous releases, I do think that Paul Rocha seems intentionally muted in “Like Lavender Rain,” “The Day That I Fall Down,” and “Echoes of Never,” further demonstrating the lackluster performance depth many of his contemporaries have featured in their recent works. He faces no lyrical beasts of burden not only because of his meticulous delivery but because of his intimate relationship with the words he’s singing, which allows for him to play a lot of these songs at a more relaxed pace without sounding like the languid mess much of the competition is producing.

The piano extends the emotional weight of the lyrics unto the instrumental faceting in “Klondike,” the aforementioned “Echoes of Never,” and “They’re All Dead” like nothing else could have, and this comes in addition to imparting a particular rusticity I wouldn’t dare to associate with similar hipster works to debut in the past ten years. This is a kind of maximalism that it’s not just okay to like, it’s easy to fall in love with, and although it’s a different look than what everyone else might be going with at the moment, that’s just another element of Rocha’s appeal to me.

They say the third time is a charm, and while I’ve got nothing against the first pair of LPs Paul Rocha released in Crayons (2012) and Stingy Alley (2018), there’s something about this third album in Apophenia that feels substantially more immersive than its predecessors did. Rocha has broken down the walls separating past, present, artist, and audience in this record, and using what has become his go-to weaponry in the battle for sonic perfection through the years, he slashes through any argument against American indie rock’s vitality in 2021. The material is spot-on sharp, and with this performer at the helm of the project, it’s properly showcased by someone deeply invested in the story it tells.