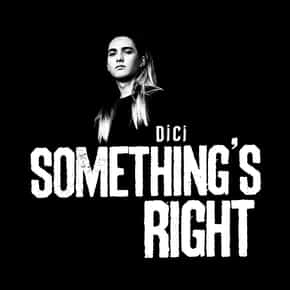 It isn’t always easy, being Dici, but it would appear that things are looking up, based on his new single, “Something’s Right.” Dici is an Italian born Rapper/Producer/Entrepreneur.  He currently resides in Miami, and has also spent time in Japan. At only 18 years old, Dici has already established himself, quite well. His newest release is a bit of a departure from the vibe of his earlier work.

Since his previous single, “Five Rings,” Dici has seemed determined to show he is more than just a speed demon. He has made a conscious effort to slow things down and make his work more instantly digestible. Interestingly, Dici has pledged to donate all of the profit made from “Five Rings,” to preserve boxing gyms, across the US. This is one more example of Dici, gradually showing his hand, and giving us a clearer picture of who he is. Of course, Dici is well known for his self-inflation, within his lyrical content.

“Something’s Right,” finds Dici experiencing disappointment in love, and then, ultimately, resolution. In some ways, I could draw some parallels between this track and the Black Eyed Peas smash, “I Gotta Feeling.” There’s an immediate sense of hope, when you hear Dici deliver the chorus, and it’s truly infectious. The beauty of a song like “Something’s Right” is that it can be attached to virtually any situation. Thanks to the track’s broad application, Dici, now has one of the most definitive additions to his catalog, to date.

Dici, generally produces all of his music, and with “Something’s Right,” we have yet another competent mix. Occasionally, you can hear some slight blemishes in the tracking, but for the most part, Dici always gives a strong representation of himself. It’s likely just a matter of time, before he starts offering his recording skills to other artists. It’s clear that Dici views himself as an artist, first, but that there is a line of interests that follows that. For now, it seems that Dici’s focus is firmly placed on cultivating his sound.

In many ways, “Something’s Right,” feels like a sequel, or at the very least, a counterpart to “Five Rings.” Dici seems more concerned with melody, than he ever has, before. Deep within his work, Dici possesses the potential to tap into a highly original style. It’s not to say that he is overwhelmed by his influences, but the work he is currently doing, still fits well in the confines of a contemporary cage. Personally, I’m rooting for Dici to expand his range of influences. Because he is still very much in his infancy, there is an infinite amount of music and ideologies for him to discover.

Because Dici is so effortlessly fascinating, it would be easy for his music to become an afterthought. Thanks to his ongoing and increased efforts, his music has shined as much as his accolades have. Say what you will, but it certainly seems like Dici is doing something right.