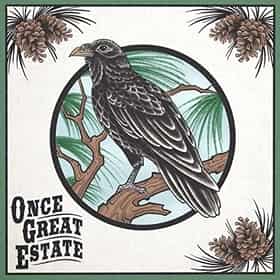 Florida based – Once Great Estate, can be compared to the likes of nobody in their category of Folk and acoustic-heavy music on Even The Undertaker’s – 8 lucid and well-crafted numbers. These are tunes to live by, and not being new to them it just made me want to hear more where they come from. The voice of Tracy Horenbein is remarkably astonishing, as well as the musicianship of fellow band members, Jeffrey Chagnon on bass, plus guitarist/mandolin player F. Matthew Burns, as well as fiddle player/guitarist Christopher Ash, and drummer Steve Burke. The sound is pure southern with complex arrangements and stunning vocals.

The album kicks off with the short piece to “Welcome” ears to the story, which goes on in a directional fashion for the most part. The intro is short and sweet, making its point as it leads into the next number. “Even The Undertaker” takes title up front to get the entire point across that it’s about something, as each song seems to somehow relate to the next, so loosely relating them shouldn’t be hard to do. It also seems to travel from the start with “Shelbyville Inn” being one stop on the road to sing about, and all stops are good.

“Southern Song” has been a favorite out of the many times heard prior to forming an opinion, and so far, it keeps my attention the most. But it’s surrounded by such good number it’s easily a take your pick situation, especially with the following number. “Battles” with its similar feel but different tempo, puts another notch on the record without questioning a note or a word. The words go deeper as the music gets more intricate and you’re left with nothing but a sensational audio experience. The songs and their authoring are second to none.

“Friction” is an exquisite little number that keeps things grounded in her voice where most of the magic lies, without taking a thing away from the band. The mandolin plays a quieter role in thus number, but it’s still a strong presence here and throughout Even The Undertaker. This is the runner up track for me, without doubting my own steeped opinion after enough passes. The song might be short, but it’s fantastic in every way possible in the process, and that is why it deserves its own paragraph to describe its place on this very fine record.

The two final tracks on Even The Undertaker both follow more territorial ground with the first being “Florida Man,” with what is of course something they’d know all about. It makes it easy to leave the words up to the writer and just enjoy another solid piece of music. But the closing number is as epic as need be, with “Nebraska” closing the release with a more seriously haunting vibe to leave you with on an album that contains zero filler. It comes highly recommended for every track once the opener is out of the way and competes with only the best in Once Great Estate’s genre.
Kim Muncie