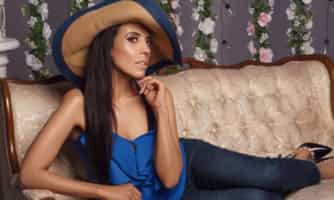 Guitar god and bandleader Carlos Santana’s daughter Cecy Santana isn’t making waves because of her famous father. The assortment of remixes for her recent single “You Make Me Say” demonstrates that this prodigiously talented young singer is performing material elastic and durable enough for eight other musical artists to remix without ever losing the original track’s core virtues. This is no small achievement.

Such tracks are often a glorified marketing gimmick. Record companies and/or artists, in lieu of releasing new material but loathe to leave any possibility unexploited, will repackage a past single with often minimal changes and hope the music buying public either doesn’t notice or care. There’s no such chicanery going on here. A diverse array of Santana’s peers and contemporaries including 20 Fingers’ Manny Mohr, DJ Kica, and Randy Norton offer listeners their own version of “You Make Me Say” and leave us with memorable musical statements rather than rehashed nonsense.

DJ Kica’s remix shares similarities. It has the same straight-forward thrust as the earlier remix, but Kica expands the canvas of the track and incorporates much more variation.There is also a higher level of subtlety working in this track. This song and its eight remixes share a common aim – entertaining the listener. Kica’s remix is the longest and the expanded canvas discussed earlier isn’t self-indulgent at all.

Randy Norton’s remix treats Santana’s vocals as a malleable entity. There’s a theatrical influence in the way he fades her voices in and out of the mix and this increased focus on atmospherics makes it one of the outstanding variations of “You Make Me Say”. It is much shorter version of the song and has a much more musically minimal approach. This is one of the best examples, as well, of a remix spotlighting the sultry edge in Santana’s voice. It casts a spell without ever sounding crass.

Its overpowering allure has a hypnotic effect. Santana possess the sort of voice capable of lifting fine material to another level. Cecy Santana contains multitudes and, as fine as this track is, it’s clearly only scratching the surface of her talents and a memorable steppingstone. These are the salad days when her touch is golden, and the public will greet her new work with bright-eyed enthusiasm. “You Make Me Say” and its varied remixes earn our favor. It’s an audience pleaser effort in any form and each of these eight different remixes will have their admirers.