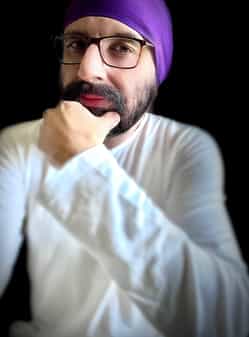 Vineet’s recent successful run of singles continues with his new track “Hurry”. It’s his first attempt within the adult contemporary genre and Vineet proves he more than has the necessary chops for this music. It requires vocal control, emotive skill, and perfect balance between the singing and musical arrangement, among less obvious demands. He meets the style’s requirements without much apparent effort.

“Hurry” has limited instrumental components. Synthesizers and pre-programmed drumming are the biggest musical contributors though Vineet does choose to pepper the track with several colorful guitar fills. He finds a spot-on mix for the song early on and rarely deviates from it. There are, however, key portions late in the track common for any cut of this form and these important variations shakes up the song enough to keep it interesting.

Listeners of every stripe will like how he mixes his vocal delivery up. Vineet’s voices moves up and down his range without any audible difficulty. This is a studio recording, yes, so vocal shortcomings can be covered up, but there’s no evidence that’s what’s going on here. It makes a lot of sense of move the song in this direction. Vineet has a roving “eye” and hunger to inhabit a wide emotional scope.

It would be nothing, however, without his ability to make it real. Vineet’s talents have been obvious for some time now. It’s clear though that he’s reaching a peak of sorts, likely the first of many, and you can hear it in easily overlooked details. The timbre of his voice has calm and unwavering self-assurance; he wears the song, despite the pain in its details, over his shoulders like a loose garment.

The video for the song is a lyric video. It is far from cliched fare, however, as Vineet frames the promo clip around a series of dramatic interactions. The implication is that these are romantic relationships but one of the best qualities about “Hurry” is that he’s written a track that can accommodate an open-ended interpretation. It’s a stylish clip without a second of pretentiousness.

Vineet’s indie status is just a label. He’s producing a rewarding musical experience each time out with the same degree of professionalism and commitment we see from artists with millions of fans. It’s a question of exposure. He’s building momentum with each new single and the growing interest in his music must taste sweet to Vineet. It’s an accomplishment on his own terms rather than pandering for commercial favor.

He’s written about a diverse array of subjects. COVID, personal relationships, keeping your values in the face of a world that wants you to compromise them, there’s nothing taboo for Vineet. This new song finds him moving through intimate terrain. He makes us part of his experience, however, without ever failing to entertain us with evocative musical backing. Expect big things from this track like his previous singles, but don’t listen to it once and file it away. This is a song with huge replay value, not a disposable pop confection.