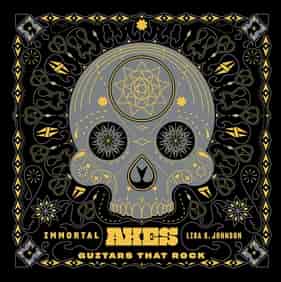 Instruments are a direct reflection of their players. The miles they travel, the stories they tell, the emotions they come to embody through the songs a musician would compose; in an instrument as incredibly identifiable and culturally significant as the electric guitar, it can be said that there’s little separation between the identity of the strings and that of the artist who strung them. For photographer Lisa Johnson, capturing the essence of a guitar’s spirit comes as second nature, and her new book Immortal Axes showcases her ability to spotlight the personality of the instrument without much context to precede the imagery.

Visually speaking, Immortal Axes is a spellbinding effort for those of us who have a real love of guitars, but it has the feel of a history lesson just as much as it would a stimulating collection of photography meant to dazzle the eyes almost exclusively. Johnson has a way with the lens, and if that wasn’t the consensus ahead of this book’s arrival on store shelves this autumn, I think it will be sooner than later.

The technical element of the guitars featured in Immortal Axes, such as the make and model, details about the players and information on how Johnson came to photograph the piece, is certainly one of the more intriguing parts of the book, but I would be lying if I said that it wasn’t overwhelmed by the aesthetically provocative contribution made by the pictures. The layout here is what grabbed my attention right from the get-go; rather than clustering different shots together, there’s a seamlessness to the images and the blurbs they’re attached to that held my focus from beginning to end.

While there’s a little more love for the rock guitarists than there is other genres covered in Immortal Axes, the selection of country players – which includes Cash, Haggard, Paisley – and jazz guitarists – namely Charlie Christian -doesn’t leave any essentials out in my view. As a music lover, this isn’t necessarily the most comprehensive collection of data on guitars in contemporary pop out there, but it’s undeniably a pleasure cruise for the eyes that any photography fiend would likely go crazy for.

For a compelling look at some of music’s most important axes, you need to get a hold of Lisa  Johnson’s Immortal Axes this October. Whether touching on the legend of the luthier, the chance meeting that produced the photos, or even the stories of those who strung these guitars to begin with, Johnson’s talented photography takes center stage like a leading frontman in this book and dares us to put ourselves in the room with these six-strings, even if only for a fleeting moment. There’s something special about the majestic look of a guitar strapped across someone’s back, but to see these instruments separated from their players, left to win our affections entirely on their own merit and that of the artists who designed them is something quite divine if you love quality craftsmanship and photographic charisma as much as I do.